First patent for an invention in history of HEC Montréal

The work of a team of researchers and professionals at HEC Montréal’s user experience (UX) laboratory Tech3Lab has resulted in a patent, which is a first for HEC Montréal.

They filed a patent application in February 2016, and a U.S. patent was issued last August. The examination process for other parts of the world, including Europe, is under way.

The patented invention is a method of visualizing a combination of a user’s affective, cognitive and eye-tracking data on physiological heatmaps (UX heatmaps). It provides immediate, deep insight into what the user is experiencing in front of an interface, such as a website, mobile app or display panel. The results of the analysis can easily be interpreted by managers or interface designers.

The strength of the innovation, first unveiled at the prestigious CHI international conference, rests on the data triangulation and multimethod approach to which Tech3Lab owes its reputation.

This new data visualization platform has already been used in a number of research projects conducted by Tech3Lab and the NSERC-Prompt Industrial Research Chair in User Experience. The start-up CubeHX, cofounded last year by Pierre-Majorique Léger, Sylvain Sénécal, Marc Fredette and François Courtemanche, is in charge of marketing the invention through the distributor Noldus.

The patent will help strengthen the commercial potential of this original technology by restricting its use and sale by possible competitors. This will boost the value of CubeHX as well as the international profile of Tech3Lab. 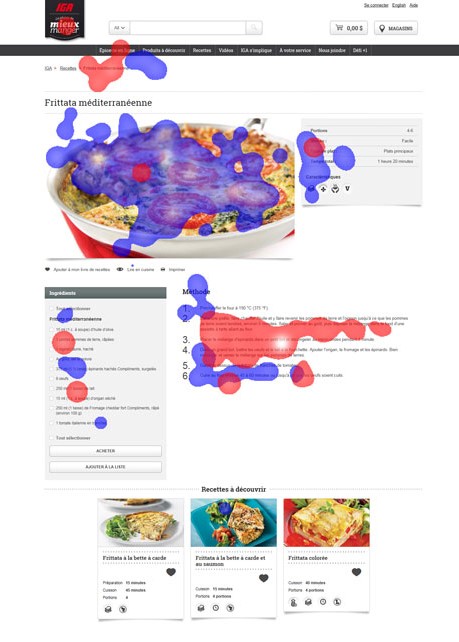 Example of a UX heatmap showing where users react negatively or positively on the Web page.