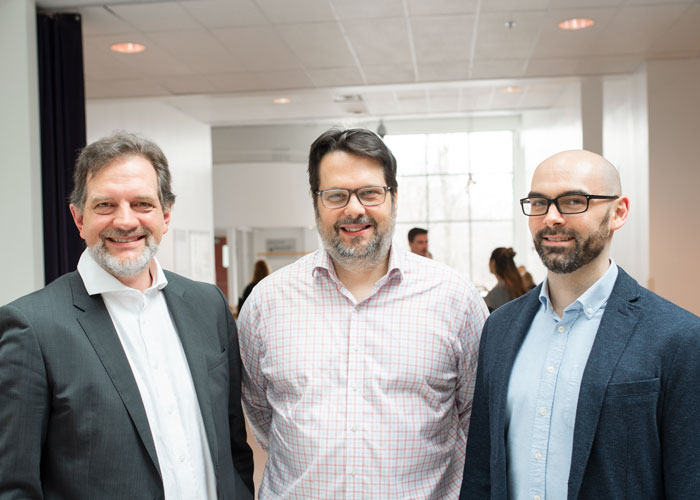 Professors Martin Boyer, Philippe d’Astous and Pierre-Carl Michaud, members of the Retirement and Savings Institute (RSI), won a prestigious award at an international forum on financial education and literacy on April 11 and 12, in Washington.

They received the Financial Literacy Research Award for a research paper on the impact of a short financial education intervention on decisions concerning tax-sheltered retirement accounts.

This year the jury chose to present the award jointly to our three professors and a team of American researchers including Professor Gopi Shah Goda of Stanford University.

The research by Professors Boyer, d’Astous and Michaud is the result of an experiment conducted with three groups of Quebec and Ontario respondents ages 35 to 55. The first was a control group, while the other two received different levels of financial education, in video form. The respondents then had to answer questions testing their knowledge and the quality of their decisions concerning contributions to a TFSA or an RRSP.

The results showed that the respondents who watched two informative videos improved their ability to make the right decisions by 8 to 10% in comparison with the control group. Consequently, the study found that brief financial education at the appropriate time can improve the quality of contribution decisions.

The research results are explained in greater detail on the RSI website.

Martin Boyer is a Full Professor in the Department of Finance and holds the Power Corporation of Canada Research Chair in Insurance and Pension Plans at HEC Montréal. He is a former Editor of Insurance and Risk Management and former Chairman of the Finance Department. He has published dozens of scientific papers on risk management in business and insurance. He holds an MSc in Economics from the Université de Montréal and a PhD from the Wharton School of the University of Pennsylvania. He is also a member of the Risk Theory Society and President of the American Risk and Insurance Association.

Philippe d’Astous has been an Assistant Professor in the HEC Montréal Finance Department since 2016. He holds an MSc in Management – Finance from HEC Montréal and a PhD in Insurance and Risk Management from Georgia State University. He is a member of the professorial team at the Retirement and Savings Institute at HEC Montréal. His research interests focus mainly on household finances.

Pierre-Carl Michaud is a Full Professor in the Department of Applied Economics at HEC Montréal and holds the Industrial Alliance Research Chair on the Economics of Demographic Change. He is the Director of the HEC Montréal Research and Savings Institute and a Research Associate with the US National Bureau of Economic Research (NBER). His research focuses on understanding certain behaviours over subjects’ lifetimes, including those relating to savings, insurance and pension plans, along with investments in health care and the economic impact of demographic change. He has received funding from many different organizations and his findings have been published in leading economic, demographics and public health journals.