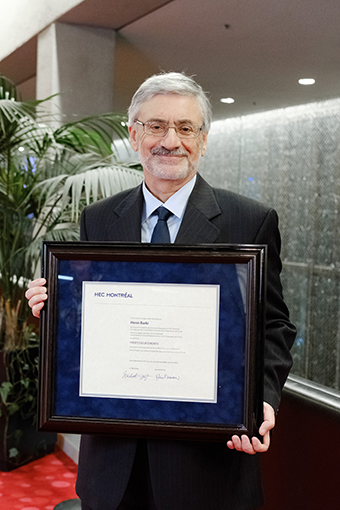 Henri Barki was awarded the title of Professor Emeritus at the Master’s-level convocation ceremony on Monday, November 19. This honour recognizes the exceptional contribution to the School’s research, teaching, development and renown by a retired professor who was in the service of the School for at least 10 years.

In a speech shortly after the ceremony began, HEC Montréal Director Michel Patry paid tribute to Professor Barki’s university career and his many years at the School.

“The fact that I was able to have a career at HEC Montréal, a truly exemplary institution, was an exceptional opportunity for which I am very grateful and very, very happy,” said Professor Barki.

The road to HEC Montréal

Professor Barki did his university studies in Turkey and Canada. He holds an undergraduate degree in Electrical Engineering and a Master’s in Management from the Boğaziçi University in Istanbul, and a PhD in Management Science from the University of Western Ontario.

An admired and recognized researcher

Professor Barki devoted his career to better understanding the IT phenomenon in organizations. He was Director of Research at the School from 1998 to 2001, and then holder of the Canada Research Chair in Implementing and Managing Information Technology from 2003 to 2017.

He was a pioneer in IT research, and even today remains one of the world’s most influential researchers in this field.

In 2007, he was ranked as the world’s 21st most-productive IT researcher, and 5th in Canada. He published 45 articles in the most prestigious journals, including Information Systems Research, MIS Quarterly, Management Science and Organization Science. His work has been cited more than 11,500 times, according to Google Scholar.

Over the course of his career, Professor Barki won many awards and distinctions, including the Best Paper award from the Administrative Science Association of Canada, in 1983, 1984 and 1993. The School also presented him with its Gaëtan-Morin Research Award in 1992, and its Pierre Laurin Research Award in 1989 and again in 1994.

Committed to his students and the community

Professor Barki is also known for his great generosity toward his students and colleagues. He supervised over 50 doctoral and master’s students and postdoctoral interns. He often acted as a mentor to young professors at the School and other institutions, offering his assistance and advice on many topics.

The scientific IT community also greatly benefited from his engagement. He was an editorial committee member and reviewer for several leading journals. In particular, he was Senior Editor of MIS Quarterly and Guest Associate Editor of Information Systems Research. In addition, he sat on program committees for many national and international conferences, and was co-chair of a number of major doctoral consortiums.