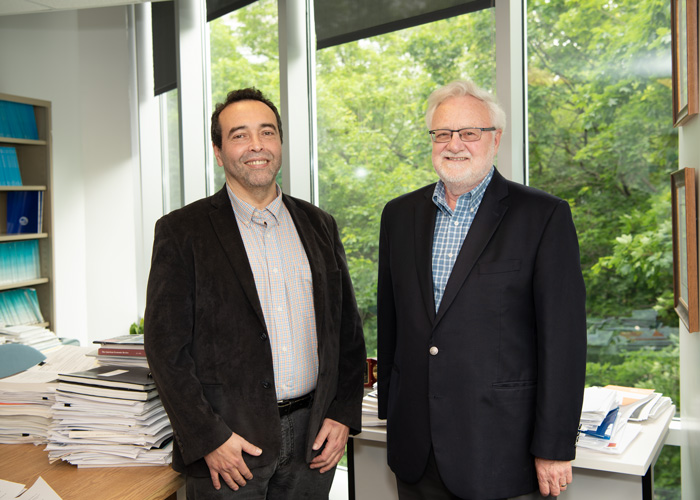 Professor Georges Dionne and Samir Saissi Hassani, a Lecturer at the Université de Sherbrooke, have won the award for the best paper published in the past year in the Journal of Operational Risk.

The judges felt that the model described in the paper was very “elegant” and the authors obtained original estimated results using actual data from US banks. The authors showed that their approach made it possible to reduce banks’ regulatory capital for operational risk by 30% – a particularly attractive perspective for US banks, which suffered record losses during the most recent financial crisis.

The authors presented their model to the American Bankers Association in Washington in fall 2016, to representatives of over 60 major banks that develop internal models for calculating regulatory capital.

This paper grew out of Professor Dionne’s long-term work on operational risk in collaboration with some of his PhD students, initially including Héla Dahen. This contribution is part of a chapter from Samir Saissi Hassani’s doctoral dissertation.

Georges Dionne holds the Canada Research Chair in Risk Management and is a Finance Professor at HEC Montréal. He is also Chair of the Risk Committee and a member of the Board of Directors of SCOR Canada, part of the SCOR group, considered one of the world’s five largest re-insurers. He is ranked as the world’s 15th leading risk management researcher, and the 16th top economist in Canada, according to recent data from the IDEAS site.

Samir Saissi Hassani is a Consultant and Lecturer at the Université de Sherbrooke. He also holds a PhD in Finance from HEC Montréal. He was the 30th doctoral student supervised by Georges Dionne.