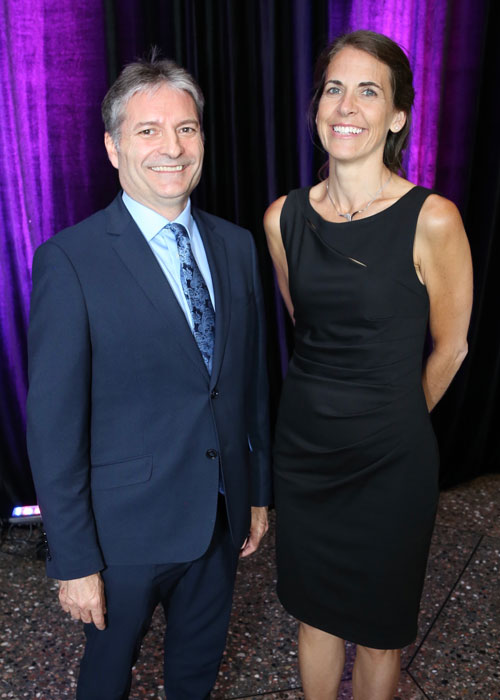 Professors François Bellavance and Geneviève Gauthier won two of the 2018 Statistical Society of Canada (SSC) awards, presented on June 5 in Montréal in recognition of their exceptional contributions to advancing statistics.

Professor Bellavance received the Lise Manchester Award, which recognizes excellence in statistical research that considers problems of public interest and is potentially useful in developing Canadian public policy. The award was conferred upon him “for his sustained, outstanding fundamental statistical research on road safety issues, for his determining role in improving road safety regulations and legislation in the province of Quebec, and for elevating the social debate and acceptance of road safety measures through the effective communication of statistical evidence.”

Professor Gauthier was presented with the Award for Impact of Applied and Collaborative Work. The SSC praised “her outstanding contributions to the promotion of innovative statistical methodologies in financial engineering, and in the training of highly qualified personnel.”

François Bellavance is a Full Professor in the Department of Decision Sciences at HEC Montréal. He is a member of the Interuniversity Research Centre on Enterprise Networks, Logistics and Transportation (CIRRELT), the Institute for Data Valorization (IVADO) and the Quebec Road Safety Research Network (RRSR), as well as an associate member of the Group for Research in Decision Analysis (GERAD).

Geneviève Gauthier is a Full Professor in the Department of Decision Sciences at HEC Montréal. She is a member of the Group for Research in Decision Analysis (GERAD) and a researcher with the Centre for Interuniversity Research and Analysis on Organizations (CIRANO). She also sits on the scientific committee of the Institute for Data Valorization (IVADO).