A number of HEC Montréal students and alumni shone at the latest Startup Weekend, fashion edition, held at the School from November 11 to 13.

Participants had 54 hours to create a viable business project that was evaluated by a jury of industry professionals.

The Cocoon project team, which took 2nd place, was made up of Sokhna Diaw, Julia Demon, Felix Antoine Lasnier (all BBA students), along with Emy Vo and Gabriel Coté.

The Public Favourite prize went to the Charlie team, of Marie Gallois, Baptiste Dubois, Clara Pochard and Tiphaine Leger (all BBA students), along with Louis Pitois and Damien Goehring.

Raphaëlle Bonin (Specialized Graduate Diploma, Management of Cultural Organizations) participated in the Spring 2016 Startup Weekend, presenting her Station Service project, a company that will rent out clothing and accessories by Quebec designers. “When I presented Station Service at the Startup Weekend last spring, it was really just a concept. Thanks to the event, I was able to fast track the project with the support of a team with a wide variety of strengths and backgrounds. It also gave me access to some mentors, and we’re still in touch.”

Raphaëlle, who is currently concentrating on developing her company, mentored the participants at the latest edition of the Startup Weekend. “For me, it’s a really intense and exciting event that gives you some important tools when you want to become an entrepreneur.”

Genevière Rousseau heartily agrees. She is the founder of BonApp, aimed at reducing personal food waste. Her project was just at the idea stage when she presented it at the March 2015 edition, where it was chosen by jury member LP Maurice as his favourite.

“That’s when it really became more serious, because the “Favourite” prize came with mentoring by LP Maurice,” Genevière says. “The project evolved, it changed name and today, after a crowd-funding campaign, BonApp has really taken shape.”

This fall, BonApp installed five refrigerators in cafés across the city where Montrealers can leave unwanted food. 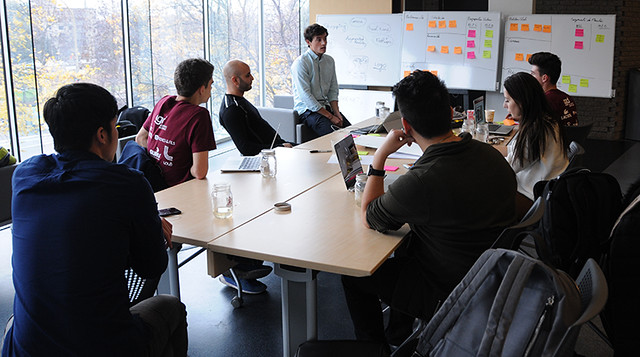