Othmane Rachid Tahri, a recent MSc (Financial Engineering) graduate, has won the 2010 CFA Montreal prize, worth $4,000, for the year’s best Master’s thesis in this field.

In his work dealing with sophisticated mathematical concepts, Othmane looked at the performance of delta-hedging strategies for European-style options, meaning those that can be exercised only on maturity. By using the S&P 500 index during a period of high volatility as his underlying security, from January 2008 to December 2009, he examined the appreciation obtained with regime-switching models as compared with that obtained using the Black-Scholes model, still the most common, although it is based on assumptions that fail to reflect the full complexity of the actual behaviour of financial assets.

By looking at a period when a financial crisis occurred, Othmane was able to show the superiority of a four-regime model as compared with the Black-Scholes model, in particular during periods of high volatility. His research produced very interesting findings, in both theoretical and practical terms!

Othmane is now working as an adviser with KPMG’s risk management practice, Advisory Services. He completed his Master’s degree with honours, and received a scholarship from the BMO Group in fall 2009 for his excellent grades. 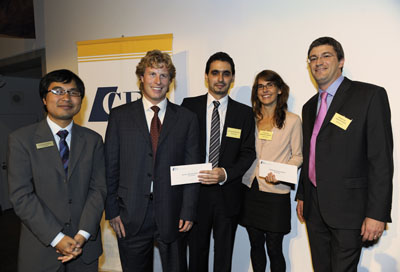