The Standard Life–HEC Montréal Fund took first place at the 10th Redefining Investment Strategy Education (RISE) Forum, in the graduate student portfolio category. The annual competition, organized by University of Dayton, in Ohio, in partnership with the United Nations Global Compact program, brought together participants from over 100 universities in 65 countries from March 18 to 20. Note that HEC Montréal also won first place in 2009 and 2008.

This year the Fund brought home the honours in the “Value” category, thanks to its annual return of 22.84%, beating its benchmark index by 1.13 points. The funds were evaluated on the basis of their performance and risk by Morningstar, an independent investment fund research firm.

The Standard Life–HEC Montréal Fund, created in 1999 with an endowment of $2 million, now has a market value of nearly $4.2 million, making it the second-largest student fund in Canada. Note that in 2009 it exceeded its benchmark index for the fifth straight year.

The fund invests exclusively in shares of Canadian companies listed on the Toronto Exchange and in Canadian government and corporate bonds. BBA and MSc students on the management committee act as portfolio analysts and managers. Along with Vincent Potier, Mohammed Reda Skalli, David Lampron, Christopher Schmuck, Viviane Gosselin and Antoine Acloque (below) 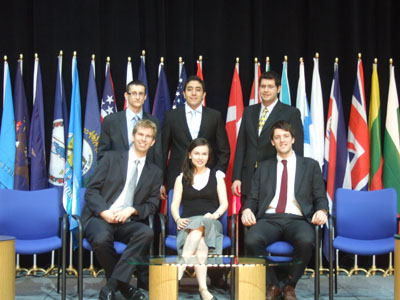 The management committee reports to a team made up of Full Professor Martin Boyer and Associate Professor Nicolas Papageorgiou, both with the Department of Finance, who oversee and supervise the students, and representatives of Standard Life and Standard Life Investments.