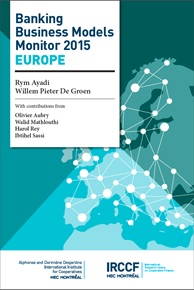 The European Banking sector has come under scrutiny with the publication of an in-depth continent-wide analysis by the International Research Centre on Cooperative Finance (IRCCF) at HEC Montreal. The Banking Business Models (BBM) Monitor 2015 Europe, which is launched today at the European Parliament in Brussels, assesses banking sector structure in light of the changing economic, legislative and supervisory environment since the 2007-2009 financial crash and ensuing economic crisis.

The detailed findings provide new evidence about many key areas of European banking: interaction between business models and ownership structures, internationalisation, migration, financial performance and operational efficiency, contribution to the real economy, risk as well as the response to regulation and supervision.

Overall, the results showed that a diverse banking system was more resilient than a system that tended to converge towards one business model. “The case of Belgium is revealing,” said the Monitor. “Before the crisis, the investment bank business model was dominant. At the onset of the financial crisis, the banking system would have virtually collapsed should it not have been for a massive government intervention.”

It warned that investment banks in France, Switzerland and the United Kingdom were also on the watch-list to prevent dealing with cases similar to Belgium.

The Monitor findings also shed light on the continuing misalignment of regulatory indicators, in particular the risk-weights and the Tier-1 capital ratio, to the underlying risks of European banks.

Moreover, it seemed that market perceptions were more aligned to the viewpoints of regulators, rather than to the intrinsic risk quality of the bank.

Continued monitoring of bank business models is essential to improve the understanding of this concept and, ultimately, to detect the accumulation of risk at a system level. “It seems that in each business model, there are worse and better performing cases, depending on the overall macro and micro economic conditions in which banks are operating. Further research is being conducted, based on this monitor sample, definition and analytical framework, in order to shed light on the characteristics of the best performing banks within each business model, to which worse performing banks should converge in the long run,” the BBM outlined.

Looking ahead, the authors express that the business model analysis can provide regulators and supervisors with essential predictive power for detecting excessive risk accumulation at a system level over a period of time – especially when external shocks were simulated, such as a change of monetary policy in Europe and an increase in interest rates. “Our prediction is bank business models would respond differently to this shock and some might be more resilient than others,” BBM stated.

The Monitor concluded that transparency and public disclosure practices, which were largely comparable across business models and included many smaller banks, remained an important concern.

The Monitor was led and co-authored by Rym Ayadi, Professor at HEC Montreal’s Department of International Business and also Director of the International Research Centre on Cooperative Finance (IRCCF), together with Willem Pieter De Groen, Associate Researcher at the IRCCF and Research Fellow at the Financial Institutions and Prudential Policy Unit (FIPP) at the Centre for European Policy Studies (CEPS).

BBM Monitor 2015 for Europe is the first comprehensive report produced by the International Research Centre on Cooperative Finance (IRCCF) at HEC Montreal. The renowned international business school ultimately aims to develop a Global Monitor of banks’ and credit unions’ business models. Moreover, Ayadi and her team aim to repeat this same monitoring exercise annually, to allow for a better understanding of the evolving business models of banks and their implications.

The IRCCF is an initiative of the Alphonse and Dorimène Desjardins International Institute for Cooperatives at HEC Montréal. It aims to develop independent academic and policy research and targeted analysis adapted to different regions of the world to promote sustainable and inclusive financial systems with a particular emphasis on the role of cooperative finance.