Gilbert Laporte, HEC Montréal Professor Emeritus, has been awarded a doctorate honoris causa for the 3rd time in his career. This distinction, saluting the quality and scope of his scientific contribution, was conferred on him by the Norwegian University of Science and Technology (NTNU), among the world’s top engineering schools.

Professor Laporte’s connections with this university extend back to 1995. For over 20 years, he collaborated on different projects with research teams from the Department of Industrial Economics and Technology Management at NTNU, dealing mainly with routing and scheduling problems in shipping, one of his fields of interest.

Since the pandemic made it impossible to hold the ceremony in Norway, the Norwegian Ambassador to Canada presented the honorary degree in person to Professor Laporte.

This distinction is further evidence of Professor Laporte’s international reputation in the field of operational research. In the past 5 years, he has also received honorary doctorates from the Université de Liège, in Belgium, and the Eindhoven University of Technology, in the Netherlands. 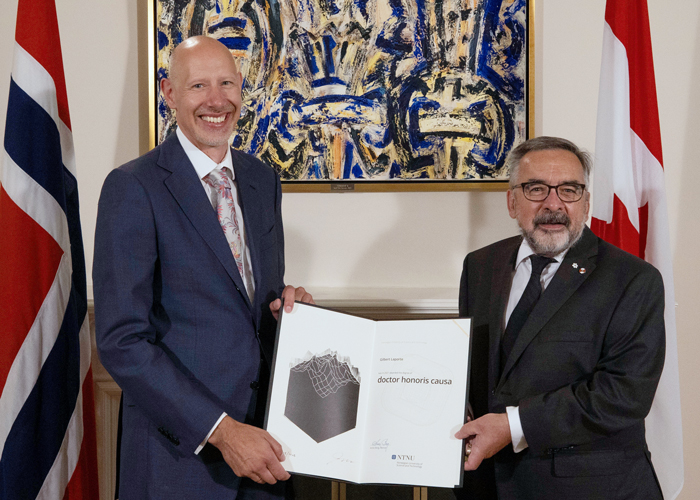 Professor Laporte holds a PhD in operational research from the London School of Economics (1975). He taught at HEC Montréal for over 40 years, and also directed the Canada Research Chair in Distribution Management from 2001 to 2020.

He also remains a member of the Interuniversity Research Centre on Enterprise Networks, Logistics and Transportation (CIRRELT) and the Group for Research in Decision Analysis (GERAD).

He has authored or co-authored 20 books and over 600 scientific papers on combinatorial optimization, mainly in the areas of vehicle routing, location and timetabling.