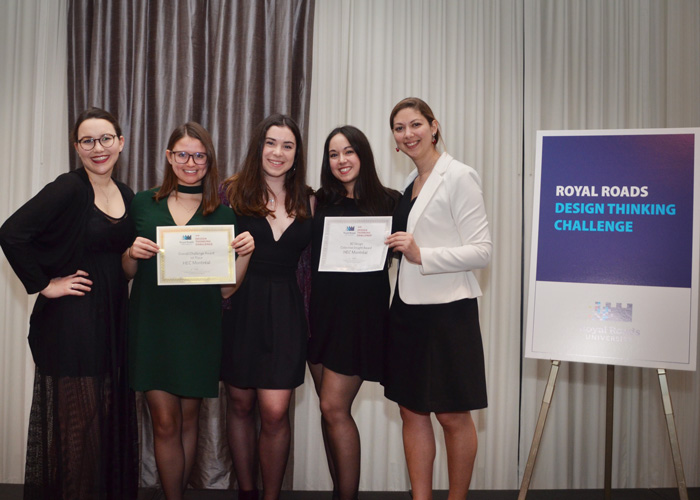 A BBA student team from HEC Montréal was crowned winner of a design thinking academic competition held in British Columbia from April 3 to 7.

Design thinking is an innovation management approach calling for co-creation. Users are consulted frequently about the proposed solution throughout the process.

The teams, from 8 universities and colleges across Canada, had to come up with solutions to cases based on actual problems experienced in the city of Victoria. In keeping with the spirit of design thinking, the teams were allowed and even encouraged to consult and share ideas with each other.

The first round was held online, from February 19 to March 20, 2018. Each team produced and shared a video outlining their solution to the challenge put forward by Victoria’s Mayor: to reduce single-occupancy vehicle trips.

The participating teams and judges then had a few days to watch and comment on each other’s videos. When they got to Victoria, in April, the competitors had to be ready to deliver a reworked and enhanced solution.

In the second round, conducted on-site, they had to come up with a strategy to reduce seniors’ reliance on cars. To do so, participants consulted with target users and explored the city’s transit system for themselves.

In addition to taking first prize, the HEC Montréal team won the BC Design Collective Insight Award, voted on by all participants, to recognize the team that was most open to sharing information with others.

Stéphanie Leverdier coached and travelled to Victoria with the team for this competition.