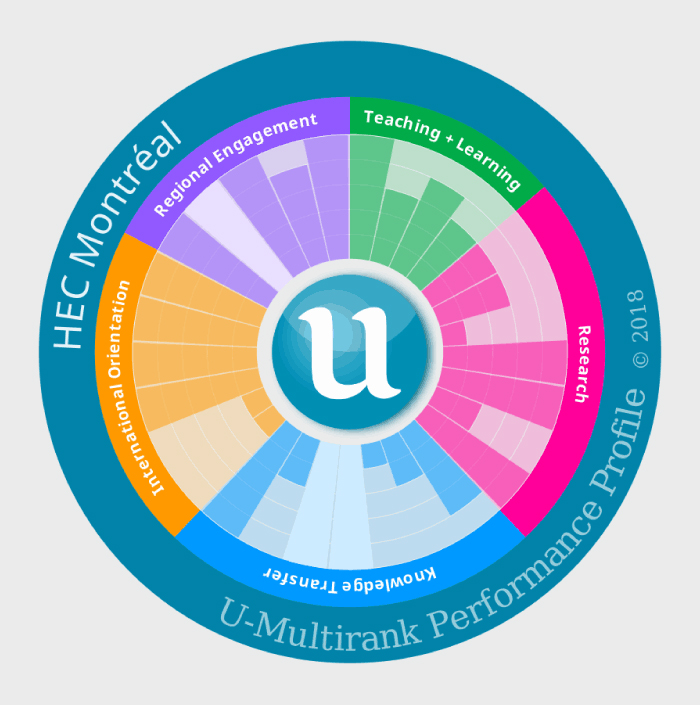 HEC Montreal’s performance as illustrated by U-Multirank’s Sunburst diagram: each column represents one of the 29 indicators. The highest columns show for which categories the School scored highest.

HEC Montréal earned very good performance indicators, including 12 “A” scores, in the 2018 U‑Multirank international ranking of universities. Each institution is evaluated using a series of 29 criteria divided into 5 categories:

The School scored particularly high for its international orientation, regional engagement and research.

The School was also highly ranked for its engagement in its region. It received an “A” score for the proportion of bachelor and master graduates working in the region, and for the percentage of joint publications with regional partners (41%).

The School also earned an “A” for its bachelor graduation rate (90%) and the percentage of its income derived from continuous professional development.

U‑Multirank is a ranking carried out by CHERPA, an independent consortium made up higher education and research organizations. Its objective is to measure the excellence of universities worldwide, using a variety of criteria. No overall scores are given; instead, users can create their own personalized rankings using the criteria they choose.

The 2018 U‑Multirank ranking evaluated 1,614 universities in 95 countries, based on data provided by the institutions themselves, databases and surveys of over 100,000 students from participating institutions. This is the fifth edition since the ranking was launched in 2014.
News > 2018 > HEC Montréal scores well in the 2018 U-Multirank ranking