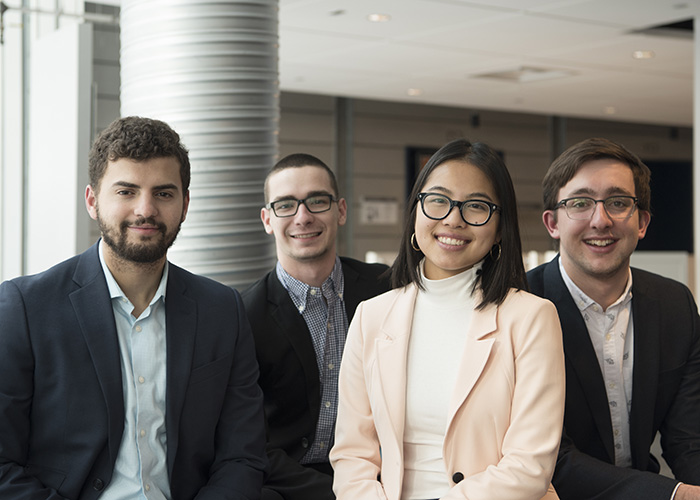 A team of four students in the B.A.A. program was named the winner of the Economics Inter-University Student Tournament, an international industrial economics tournament held online from October 24 to December 2.

The team representing the School was made up of Abderezzak Amimer, Mathieu Potvin, Nicolas Richard and Victoria-Mei Zummo. They beat out 30 teams from 14 countries, including runner-up, the Toulouse School of Economics, widely recognized as the birthplace of industrial economics.

The winners are all part of the AGIR cohort, a course of study offered to a limited number of B.A.A. students, based on an integrative approach emphasizing practice and promoting autonomy.

Justin Leroux, a professor in the Department of Applied Economics, was responsible for assembling a team to represent the School in the tournament. “This tournament was geared to students at all levels, including graduate-level students, but I decided to give members of the AGIR cohort a chance, because it was consistent with the spirit of the course of study,” he explained.

The competition was organized by Economics Games, a gaming website designed to teach industrial economics, microeconomics and game theory.

During the simulation, participants were required to make decisions concerning quantities produced, prices and the choice of technology, for a company dealing with three competitors in a given market. In addition, the company had to comply with an environmental policy. The goal of the game was to maximize profits.