CPP study: Productivity at the SAQ stagnant for nearly 30 years

While the actual net profit of the Société des alcools du Québec is now 1.7 times higher than in 1989, productivity at the state-owned corporation has stagnated over the entire period. In other words, there have been no true productivity gains since the late 1980s. This is the main finding of a recent study by the HEC Montréal Centre for Productivity and Prosperity – Walter J. Somers Foundation.

“This is a significant conclusion,” says CPP Director Robert Gagné. “It means that the Quebec government has not benefited as much as it could have from retail alcohol sales. By neglecting the importance of efficiency at the SAQ, the government has forgone potential additional income, or else it has forced consumers to pay more for their alcohol.”

The study analyzes the relationship between the SAQ and its sole shareholder – the Quebec government – and finds that there are few incentives for efficiency. Although the state-owned corporation has clear objectives in terms of dividends to be paid, there is no mechanism to ensure that these dividends are accompanied by improved efficiency. Since the SAQ is a near-monopoly faced with little competition, it enjoys extensive control over its retail prices and operating costs, and consequently over its profits. This allows the corporation to declare a large dividend every year, without having to worry about the efficiency of its operations. 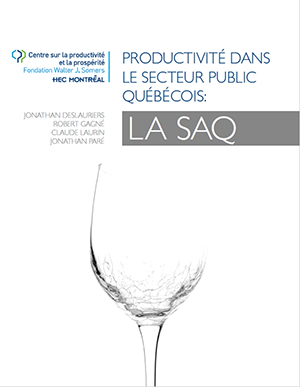 “It is essentially for this reason that there have been practically no productivity gains over the past 27 years, even though the SAQ has made huge contributions to government coffers,” Gagné explains. “With no specific requirements in terms of efficiency, there will never be sufficient incentive for the SAQ to maximize the dividends generated by its activities. In the long term, it is Quebec society as a whole that loses out.”

The productivity indicators developed by the CPP show that the SAQ’s expansion strategy in the late 1990s hindered its productivity. It was unable to efficiently manage the rapid growth in the number of outlets, and its productivity declined drastically. In the end, although this expansion considerably boosted SAQ sales, it was at the expense of efficiency. And despite the significant productivity gains in recent years, they have barely made up for the productivity losses over the past 27 years.

The study leads to a clear conclusion: the Quebec government needs to review its requirements for the SAQ. “In addition to its dividend objectives, the Quebec government should be setting clear efficiency goals,” concludes Gagné. “Based on the indicators developed in the study, it could set targets allowing it to concretely evaluate the corporation’s efficiency. And in the end, it is Quebec society as a whole that would benefit from closer oversight of the SAQ’s operations, through lower prices for consumers or higher dividends for the government.”