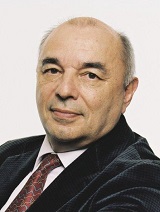 On May 3, 2015, 914 graduates from the BBA program of HEC Montréal (including 204 students from the very first graduating class of the bilingual program launched in the fall of 2012) gathered for their convocation address at Place des Arts. During this ceremony, Université de Montréal, with a recommendation from HEC Montréal, awarded an honorary doctorate to Jean-Paul Bailly, an outstanding leader of the French public sector.

He was initially recruited by RATP in 1970 where his superiors, who appreciated his dynamism, genuine spirit and management style, predicted a very bright future for him. He continued to climb the ranks of RATP over the years where he held various management positions before being appointed Chief Executive Officer in 1994.

In September 2002, after more than 30 years of service with RATP, Jean-Paul Bailly was appointed President of Groupe La Poste. Under his leadership, La Poste became a dynamic, independent and profitable business group, which survived with no state subsidy. He resigned officially in September 2013, but kept the title of Honorary President.

As a great supporter of HEC Montréal, Mr. Bailly serves on the International Advisory Board (IAB) of the School since its foundation in 1994 and was named Honorary Member in 2014.

“For over 20 years, Jean-Paul Bailly has been involved in the development of HEC Montréal as a member of the IAB; a board comprised of senior executives who help shape the thought-process of the School concerning internationalization strategies and who contribute to building HEC Montréal’s networks across the world. His contribution is much-appreciated and earned him the title of honorary member. I acknowledge his contribution even further as Mr. Bailly can proudly say that he took part in every single one of IAB’s meetings,” said Michel Patry, Director of HEC Montréal.

Indeed, this inspiring leader has been the subject of two books published by a graduate and a Full Professor at HEC Montréal: Ali Fadil and Taïeb Hafsi. Moreover, the French government recognized his many accomplishments by naming him Officer of the French Legion of Honour and Commander of the National Order of Merit.

“There is no doubt that though surprised, I receive this honour with great joy and genuine pride. The surprise comes from being made Doctor Honoris Causa from your institutions for the first time. When I asked why, I was told that it was with the hope to help graduates discover an inspiring and perhaps useful management philosophy and experience,” noted Jean-Paul Bailly, 2015 recipient.

The awarding of an honorary doctorate to Jean-Paul Bailly recognizes his exceptional contribution to the management field. In addition, Mr. Bailly is truly a model for the whole academic community of the School: students, staff and graduates. HEC Montréal is thus extremely proud to bestow this honour to Mr. Bailly.