Guy Fréchette (HEC 1970), a member of the HEC Montréal Board of Directors, Chairman of the Board of the Fondation HEC Montréal, company director, Ernst & Young retiree and ardent Carabins fan, recently donated $500,000 to the Université de Montréal’s Carabins elite sports program. The donation, part of the Campus Montréal major fundraising campaign, is the largest ever made to a sports program at a French-language university in Quebec.

This remarkable gift will support the efforts of the 450 athletes on the 19 Carabins teams studying at the three institutions that make up Campus Montréal: HEC Montréal, Polytechnique Montréal and the Université de Montréal.

Back when he was studying accounting at HEC Montréal, Mr. Fréchette would have liked to join the Carabins football team, but the team had been disbanded in those days – a time when the focus was more on sports for everyone than elite sports. “You could say that my reason for giving is to allow lots of young student-athletes to enjoy the experience that I missed out on,” says Mr. Fréchette, who was named a distinguished alumnus by HEC Montréal in 1998. “In addition to the superb education they’re receiving, what they’ll learn through playing sports will allow them to make their mark and contribute to our society’s advancement. The Carabins are role models for our young people. It’s important to me to help them develop their full potential.”

In addition to his brilliant 38-year career with Ernst & Young, Mr. Fréchette has always been very active in the community, serving as President of the Board of Trade of Metropolitan Montreal in 2000-2001 and working with HEC Montréal. He has also been a member of the CEPSUM board for a number of years and a Governor of the Carabins since 2002.

“It’s the quantity and quality of our projects that make our fundraising campaign the largest ever in the history of the French-speaking world,” says John Parisella, Executive Director of Campus Montréal. Elite sports have become a trademark for our campus. Succeeding in a competition and succeeding at one’s studies go hand in hand. We are training exemplary leaders and citizens for communities both here at home and abroad. This gesture on the part of Mr. Fréchette will help us boost philanthropy among Francophones. It truly points to a better future.”

The Carabins elite sports program has been one of the fastest-growing programs in Canada since it was relaunched in 1995. Today it is the largest French-language university sports program in Quebec in terms of the number of student-athletes and teams, and the second-largest overall. Mr. Fréchette’s support will make it possible to consolidate and improve the services offered to student-athletes in their academic and sports lives. 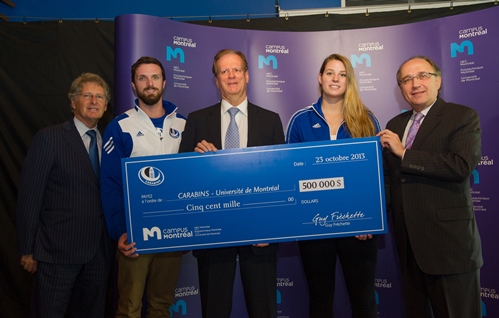 John Parisella, Charles Francis, a Carabins swimmer and member of the Canadian national team at the London Olympics, an arts and science student at the Université de Montréal, Guy Fréchette, Vicky Savard, a Carabins volleyball player and secondary school science and technology teaching student at the Université de Montréal, and Paul Krivicky, Executive Director of the CEPSUM.