Presentation of a Plaque Commemorating the Founding of the School

HEC Montréal was presented with a plaque commemorating the founding of the School in 1907, at a ceremony organized at the School by Parks Canada. The Honourable Jim Prentice, federal Minister of the Environment and Minister responsible for Parks Canada, represented by the Honourable Leo Housakos, Senator, unveiled a plaque today in the IBM amphitheatre saluting the national historic significance of the founding of the École des hautes études commerciales de Montréal. The event was all the more significant as it was held on the anniversary of the school’s opening day, October 4, 1910.

Over 150 people attended the ceremony, including many dignitaries: Raymond Bachand, Minister of Finance, Quebec Minister of Revenue, Minister responsible for the Montreal Region and MNA for Outremont, Michel Leblanc, President and CEO, Board of Trade of Metropolitan Montreal, Helen Fotopulos, Executive Committee member responsible for Culture, Heritage, Design and the Status of Women, representing Montreal Mayor Gérald Tremblay, Jean-Claude Marsan, representing the Historic Sites and Monuments Board of Canada and master of ceremonies for the event, and Hélène Desmarais, Chair of the HEC Montréal Board of Directors, as well as several representatives of the consular corps based in Montreal.

Speaking on behalf of the HEC Montréal community, director Michel Patry said he was honoured by this significant gesture of recognition by the federal government. Looking back at the key points in the school’s history, he stated, “In 1907, a handful of visionaries turned a dream into reality by creating HEC Montréal. Since then, its tradition of innovation has enabled it to rise to the ranks of the world’s top management schools. And with HEC Montréal now showing the highest standards of excellence in all areas of activity, it remains guided by the ambition of continuing along this path with boldness, integrity and determination.”

“I am proud to take part in recognizing the founding of École des hautes études commerciales de Montréal, which has enabled tens of thousands of graduates to contribute to building this country by defending the right to do business in French,” said the Honourable Housakos. “Many students went on to become leaders in their field, and some attained international stature.”

Established by the Government of Quebec in 1907, at the urging of the Chambre de commerce de Montréal, the business school contributed to French Canadians’ rise to positions of influence in Canadian business. By training an intellectual elite focused on economic issues, it fostered the emergence of a distinctive school of thought. This approach, reflecting the reality and aspirations of French Canadians, played an instrumental role in Quebec economics after the Second World War. Prestigious and internationally renowned, HEC Montréal helped assure the economic vitality and cultural affirmation of Francophones within Canada.

“This institution’s international reach is demonstrated both by its having obtained three of the most prestigious international accreditations in its field and by the international stature of its faculty members,” said Minister Prentice. “This designation marks its importance and confirms its creation as a highlight in Canadian history.” 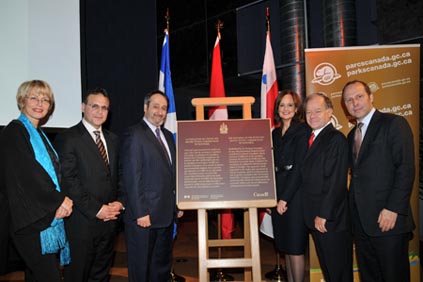 From left to right, Helen Fotopulos, Executive Committee member responsible for Culture, Heritage, Design and the Status of Women, City of Montreal, the Honourable Leo Housakos, Senator, Michel Patry, Director of HEC Montréal, Hélène Desmarais, Chair of the HEC Montréal Board of Directors, Raymond Bachand, Quebec Minister of Finance, Minister of Revenue, Minister responsible for the Montreal Region and MNA for Outremont, Michel Leblanc, President and CEO, Board of Trade of Metropolitan Montreal.