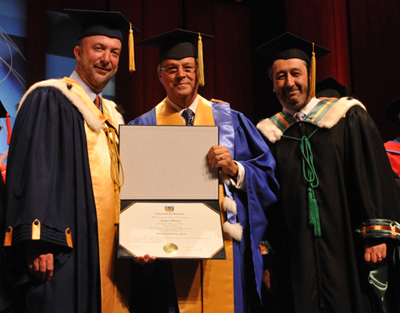 At the annual undergraduate convocation ceremony, held on Sunday, May 30 in Salle Wilfrid-Pelletier at Place des Arts, HEC Montréal awarded an honorary doctorate to L. Jacques Ménard, OC, President of the BMO Financial Group, Quebec, and Chair of the Board of BMO Nesbitt Burns. The honorary degree was conferred on him by the Université de Montréal at the School’s recommendation.

The honorary degree was presented to Mr. Ménard before the convocation ceremony for new regular and trilingual Business Administration (BBA), Management (BGest) and Science (BSc) graduates, who attended the ceremony along with their guests, families and friends. This year, HEC Montréal awarded some 1,230 undergraduate degrees.

“Mr. Ménard is one of the most influential figures in Quebec and Canadian business circles. His energy, his success and his commitment to encouraging young people to remain in school are sources of inspiration for our graduates – the new leaders who will pave the way for our society’s future. We are very proud to award him this honorary doctorate today,” said HEC Montréal Director Michel Patry.

Mr. Ménard, who earned an MBA from the University of Western Ontario in 1970, studied at Loyola College and Collège Sainte-Marie in Montréal. Since the start of his career, he has been involved in many different socio-economic organizations. In 1989, he served as President and Chair of the Board of Trade of Metropolitan Montreal. He was a member of the Economic Council of Canada and a Director of the Société générale de financement. From 1996 to 2001, Mr. Ménard was Chair of the Board of Hydro-Québec and, in 2000, became Chair of the Board of the Investment Dealers Association of Canada. In 2004 and 2005, he chaired the Task Force on the Sustainability of the Québec Health Care and Social Services System. In 2008, he published his first book, entitled Si on s’y mettait…, outlining ten concrete proposals for ensuring Quebec’s future growth.

“It is a tremendous pleasure for me to accept this mark of distinction from HEC Montréal,” said Mr. Ménard. “It is a very moving experience to find myself surrounded by all these new management graduates, who will contribute to our country’s future in their own way. I hope that all current and future students in Quebec will one day have the opportunity to stand on the stage and know the joy of receiving a diploma that will guarantee them a better future.”

HEC Montréal is particularly grateful for Mr. Ménard’s commitment to the School, as he serves as a member of its International Advisory Board, a group of senior executives who help guide the School’s internationalization strategy and play an important role in strengthening its global networks. Last fall, he co-chaired the HEC Montréal Commerce Gala, raising funds to support initiatives to encourage students to remain in school.