Louis Jacques Filion, holder of the Rogers - J.A. Bombardier Chair of Entrepreneurship, has been awarded the Entrepreneurship Promotion Award in recognition of his commitment throughout his career to promoting entrepreneurship among young people. Quebec Premier Jean Charest presented him with this prestigious distinction at the 28th Mercuriades gala, held on April 9 at the Palais des congrès de Montréal. 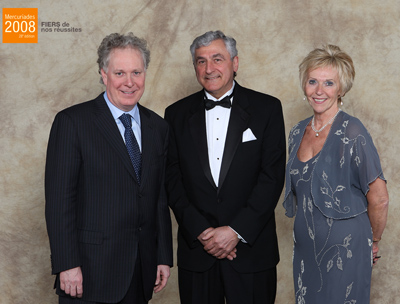 Professor Filion feels that the field of entrepreneurship is very much in line with the aspirations of the new generation. “Young people today are better educated and informed than before, and are looking for more control over their professional lives. They want to have a say in how work is organized, and to work more closely with their supervisors. In addition, more of them are interested in reaching the upper echelons of the organization earlier in their careers than their parents were. The field of entrepreneurship offers promising opportunities to achieve their potential and their professional goals,” he notes.

Professor Filion has always been interested in entrepreneurial practices, and has received some of the most prestigious awards saluting his commitment to promoting entrepreneurship on the national and international scenes. In 2007, he received the Advancia-CCIP Award for his book Devenir entrepreneur : des enjeux aux outils, written in co-operation with Alain Fayolle. In 2006, the Association internationale de recherche en entrepreneuriat et PME (AIREPME) honoured him with the Julien-Marchesnay award, and in 2005, the International Council for Small Business (ICSB) presented him with its highest distinction, making him a Wilford White Fellow. He received the Lifetime Achievement Award from the Canadian Council for Small Business and Entrepreneurship (CCSBE) in 2004.

In addition, the 2008 class (9th year) of the diplôme d'études professionnelles approfondies offered by the Institut de la Francophonie pour l’entrepreneuriat (IFE) of the Agence universitaire de la Francophonie (AUF) has appointed Professor Filion its class patron, in honour of his commitment to promoting entrepreneurship in French-speaking countries.

Before devoting himself to teaching full-time, Professor Filion held various management positions, in particular as a consultant with Ernst & Young, founded a number of companies and acted as a manager for several small businesses. He has some one hundred publications to his credit – including Management des PME and Les représentations entrepreneuriales (collection co-edited with Christian Bourion), his two latest, published in 2007 and 2008 – and has spoken at different venues around the world on numerous occasions.

The Entrepreneurship Promotion Award was created for the 2005 edition of the Mercuriades by the Fédération des chambres de commerce du Québec, in partnership with the Secrétariat à la jeunesse. The distinction complements the Quebec government’s strategy to develop an entrepreneurial mindset among young people, entitled Défi de l’entrepreneuriat jeunesse (Youth Entrepreneurship Challenge).