A day in the upper echelons of the business world

Two BBA students are finalists in the CEOx1Day program 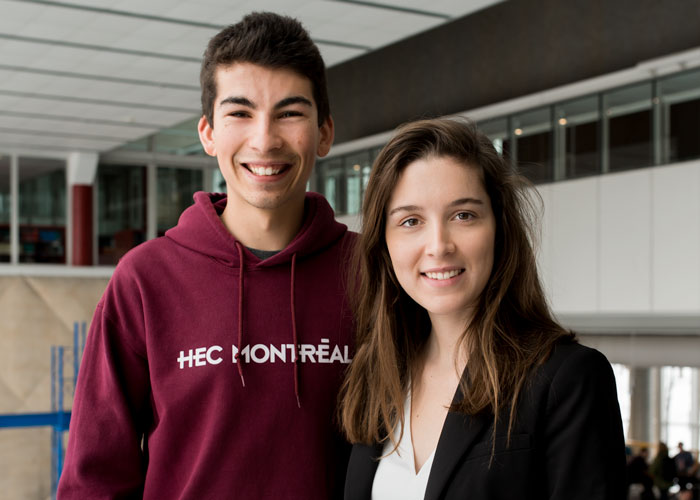 Élodie Lussier Piché and André Dasté are two of the 18 Canadian finalists in the CEOx1Day program. This meant that they recently both got to be matched with a senior executive at a major Canadian company and to shadow him or her on the job for a day.

This day in the life of a CEO is the ultimate reward in a student competition that began in September 2018. Following a selection process that had them submit a CV, undergo a series of psychometric tests and take a telephone interview, a group of semi-finalists (14 for Quebec) was invited to spend a half-day in the offices of the executive search firm Odgers Berndtson.

Of these fourteen, four were chosen to be matched, including Élodie Lussier Piché and André Dasté. They are both third-year Bachelor of Business Administration (BBA) students at HEC Montréal.

Élodie Lussier Piché got to spend the day with Danielle Lamarre, President and CEO of Cirque du Soleil, on February 14. After arriving at 8:30 that morning at the company headquarters in Montréal’s Saint-Michel district, her very full day included a guided tour of the Cirque – from the sewing workshops to the training gyms and technology labs – , an opportunity to meet some of the members of the Cirque executive team and several meetings on different matters being overseen by Lamarre.

She also enjoyed a number of face-to-face conversations with Lamarre, giving her a chance to ask him lots of questions, take home some tips and hear various stories about his career.

“I was struck by the complexity and especially the size of Cirque du Soleil. It’s enormous, and that implies some aspects of management, including legal ones, that I’d never considered,” she says. She was impressed by the number of meetings Lamarre has to attend and how they take up so much of his day. And that’s not to mention his business trips, often weekly, to places around the globe.

Her best moment of the day

“Touring the headquarters. It’s so impressive to see everything involved in putting a show together, and all the material it takes.”

One tip she intends to apply

“Get enough sleep and pay careful attention to your physical health. Mr. Lamarre is very organized and disciplined. He goes to bed early and he hits the gym at 6 o’clock every morning.”

How she managed to stand out in the competition

“Getting straight to the point during the interviews. Being honest and real.”

Sharing a day with Nathalie Paladitcheff

For his part, André Dasté spent the day on February 25 with Nathalie Paladitcheff. She’s President of Ivanhoé Cambridge, a real-estate subsidiary of the Caisse de dépôt et placement du Québec.

André is quick to admit that before meeting Paladitcheff he knew little about her and her company. He was pleasantly surprised to learn about this influential business leader’s values:

“Her vision is really Quebeckers first. She’s very aware of the fact that the assets she manages don’t really belong to the company, but to Quebeckers. I really liked that mindset,” he says.

André got to attend a number of meetings with other Ivanhoé Cambridge senior executives. As he is specializing in Information technology, he especially enjoyed his interview with the company’s head of IT, Jean-François Perras.

He was impressed with the number of business issues the CEO has to deal with in a single day. Even during lunch, he says, her assistant came to her to settle a thousand and one details. “Not a second is left to chance.”

His best moment of the day

“Standing outside her office door. That moment of waiting filled with all the excitement and nervousness of meeting her for the first time.”

One tip he intends to apply

“Find meaning in what you’re doing, that’s the key to thriving.”

How he managed to stand out in the competition

“There’s no doubt that I was the most introverted of the 14 semi-finalists. So I let the others do most of the talking, but I listened a lot and didn’t try to be someone I’m not.”