HEC Montréal Adjunct Professor Richard Legendre received a singular distinction for his contribution to the development of sports in Quebec when he was officially inducted into the Temple de la renommée des sports du Québec, the Quebec sports hall of fame, on September 24, in the “Builder” category.

Professor Legendre is one of this year’s 11 inductees selected by the Panthéon des sports du Québec, a non-profit organization that recognizes figures in the sports world who have marked Quebec history. To date, the Panthéon has honoured a total of 269 athletes and builders. 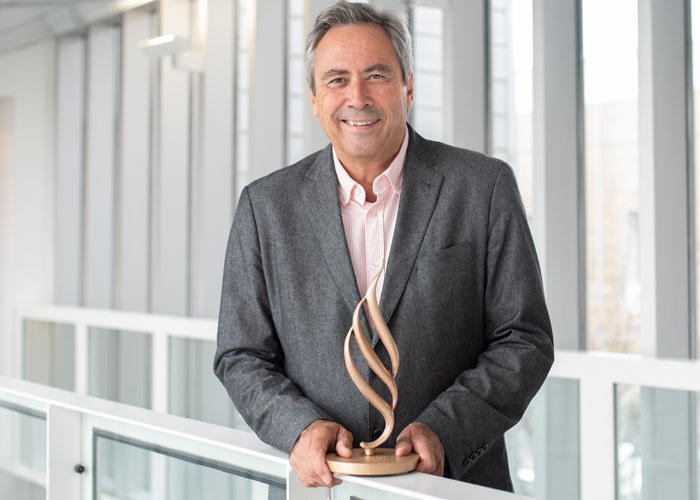 Professor Legendre is known mainly for his involvement in tennis in Quebec. He was the prime mover behind the creation of the Jarry Park tennis stadium in Montréal, which hosts the Canadian Open tennis championships. He was also involved in soccer, with the Montréal Impact, and in provincial politics, serving as Minister of Sports, Recreation and Tourism.

“It is a tremendous honour for me to be inducted into the hall of fame next to people like former Montréal Mayor Jean Drapeau. After devoting myself to the sports world for nearly 40 years, I am very proud to accept this recognition,” he said.

He recently joined the HEC Montréal faculty, and says he appreciates the excellent timing of this induction as he begins a new phase in his life in academia.

Professor Legendre will now be sharing his experience as a manager with students in the short graduate program in sports management and the specialized graduate diploma in sports management. His presence will also be an opportunity for the School to forge closer bonds with the Quebec sports community through different educational and research initiatives.

Richard Legendre holds a degree in Recreation from the Université du Québec à Trois-Rivières. He first made a name for himself as a tennis player, winning the Canadian junior championships in 1971, and as a professional player on the ATP circuit from 1974 to 1979.

After a number of years as a coach, in particular with the Quebec tennis team, he took the helm of the Montréal office of Tennis Canada in 1988 and began transforming the Jarry Park baseball stadium into a national tennis centre.

From 2001 to 2007, he served as the MNA for Blainville in the National Assembly. For two of those years he was a government Minister, for Youth, Tourism, Recreation and Sports.

In 2007 he joined the Montréal Impact as Executive Vice-President of the soccer club and of the Saputo Stadium.

He retired from the sports world in December 2018, and in that same year joined HEC Montréal as an Adjunct Professor in the School’s sports management programs.