The EMBA McGill-HEC Montréal program held the first meeting of its newly created advisory board. The advisory board, under the Chairmanship of Thierry Vandal, CEO of Hydro-Québec, is composed of 14 senior business leaders, including 5 program alumni. Its role is to guide the strategic direction of the program.

The creation of an advisory board is an important step for the program. It will ensure that the program stays relevant and innovative – both very important in the competitive executive education market.

Members of the Advisory Board

About the EMBA McGill-HEC Montréal program

Ranked 4th in the world for the quality of its students by The Economist, the EMBA McGill-HEC Montréal is a partnership between McGill University and HEC Montréal. It is an MBA program for seasoned managers who continue working while they participate in the 15 month program. The program welcomes approximately forty participants annually with an average of 18 years of work experience and 11 years in a managerial position. Classes typically meet Thursday through Sunday, once a month. Reflecting the reality of Canadian business, the program is delivered in a bilingual format. The program is practice-focused and builds on Henry Mintzberg’s managerial mindsets. 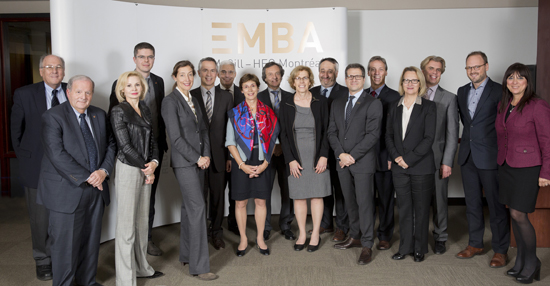