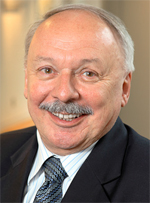 World-renowned human resources management professional Maurice Lemelin has been appointed a Professor Emeritus. The distinction was announced on September 5, at the HEC Montréal graduate convocation ceremonies.

Throughout his career at HEC Montréal, spanning more than 40 years, Professor Lemelin has made a huge contribution to advancing teaching and research at the School, adding to its renown and enhancing its internal operations.

In teaching, Professor Lemelin is in a class of his own. Thanks to his devotion and remarkable teaching skills, he has helped to educate a whole generation of human resources and industrial relations management professionals in Quebec. HEC Montréal presented him with its Grand Prize for Teaching Excellence in 2003, to salute his exceptional contribution as an educator over his entire career.

In the area of research, particularly in the fields of collective bargaining, conflict management and human resources management, Professor Lemelin has contributed in a wide variety of ways. Note that he was one of the first to discuss the concept of employee motivation, a field of research that has become an essential part of human resources management. All in all, he has authored 7 books, 19 book chapters and 22 papers published in scientific journals. He has written 17 research reports and over 30 case studies. In addition, he has had over 100 speaking engagements, given more than 100 media interviews and served as a panelist for over 50 roundtables. He is also a member of the scientific advisory boards of a number of leading journals, including Revue Négociation, Revue de prévention et de règlement des différends, and Revue française de gestion des ressources humaines.

Professor Lemelin is highly acclaimed for having helped develop his profession. His influence has widely surpassed the academic world and reached the national and international professional and business communities. As a result, in 2006 he was awarded the honorary title of Professional Emeritus from the Ordre des conseillers en ressources humaines et relations industrielles agréés du Québec, for his contribution to the advancement of the profession. He has also been a board member of Brock Engineering Inc., Dettson Industries Inc. and the Social Science Federation of Canada.

He is or has been president of several organizations and advisory committees, including the Conférence internationale des dirigeants des institutions d’enseignement supérieur et de recherche de gestion d’expression française, the Crudem Foundation and the Bureau de consultation jeunesse, supported by Centraide of Greater Montreal, as well as the business information committee of the Board of Trade of Metropolitan Montreal.

He has been a guest professor at the Université de l’île de la Réunion, the Université de Rennes 1, the Bucharest University of Economic Studies and the Université Mohammed V in Morocco. He has also helped to evaluate seven university teaching programs in Asia, Europe and the Middle East, as well as completing some one hundred consulting mandates in Canada and thirty or so other countries. Lastly, note that he has been a member of four professional orders and associations, including the prestigious Society of Professionals in Dispute Resolution.

Professor Lemelin has also made a substantial contribution to managing the School itself. He was the first Director of the Department of Human Resources Management, from its inception in 1992 to 1998. Between 1987 and 1994, he served as Director of Parapedagogical Services (combining computer services, the library, audiovisual services and the School archives), as well as heading the School’s Human Resources Office and directing its library. Even today, Professor Lemelin is very active at the School, as a regular contributor to Executive Education and as chair, since 2012, of the Research Ethics Committee.

He graduated from HEC in 1969 and holds a PhD in Industrial Relations from the University of California, Los Angeles (UCLA).

The title of professor emeritus is awarded to a retired professor who was in the service of the School for at least 10 years and is recognized and admired by his or her peers for his or her exceptional contribution to research, teaching, and the development and renown of HEC Montréal.  The title is conferred on them after a secret ballot and with the approval of the School’s Honorary Doctorates and Emeritus Committee and the Academic Council.