Le contenu
News > 2014 > Energy: We have to change, and complementary sources are key

Energy: We have to change, and complementary sources are key

If we are to stop or at least limit global warming, we have to change both our behaviour and our energy sources. So says Martin Imbleau, Vice-President, Operations, Major Projects and Renewable Energy with Gaz Métro. 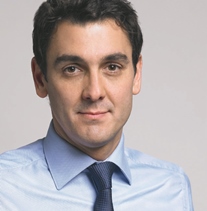 For several years now, Mr. Imbleau has taken part in the Spectre* lectures held by HEC Montréal as an expert on energy-related economic and environmental issues. He has also been invited to speak on these issues elsewhere in Canada, and in the United States and Europe.

Internationally and in the academic community, he is also recognized as a human rights expert. He has written a number of publications on Holocaust denial, genocide and crimes against humanity. In 2001, he went to Rwanda to serve as an observer for Amnesty International.

“My interest in the energy sector is also a social one,” he explains. “It’s a way of giving back to the community in an area that’s crucial for our planet’s future.”

In addition, Mr. Imbleau applies his expertise in both areas to advancing knowledge, as he is a member of the steering committees for the Raoul-Dandurand Research Chair in Strategic and Diplomatic Studies (UQÀM) and the new Chair in Energy Sector Management at HEC Montréal.

What are the main trends in the energy field, and what impact are they having on Quebec?

We are seeing major changes, both in producing regions and countries and in energy sources.

In 2012, the International Energy Agency (IEA) predicted that the United States would outpace Saudi Arabia and Russia as the world’s largest producer of natural gas and petroleum by 2020. In fact, last year US output already surpassed Russian figures, thanks to the massive growth in oil and shale gas extraction by hydraulic fracking, mainly in North Dakota, Pennsylvania and Texas. The IEA says that by 2030 the United States will be the world’s largest energy exporter.

These changes are bound to have a major impact on Quebec, in terms of both its sources of supply and its ability to export electricity.

The other major trend underscored by the IEA in its 2013 report is the rise in renewable energy, including wind and solar power. According to the Agency, 50% of global energy growth will come from these two sources by 2035. Wind energy alone, with increasingly competitive production costs, should account for 7% of world electricity production within the next twenty years, it says.

What about the environmental impact?

Unfortunately, the current growth in world consumption means that it will be impossible to reach the target of limiting global warming to two degrees Celsius. An increase of three or four degrees appears more realistic. In its 2013 report, nonetheless, the IEA noted a number of initiatives that could reduce CO2 emissions, in particular President Obama’s climate action plan, China’s decision to limit the domestic use of coal, European debates on greenhouse gas emission reduction targets and the discussions on a new plan for Japan.

What actions are most likely to limit global warming?

We urgently need to change both our behaviour and our energy sources. We have to stop thinking that the perfect solution will just magically appear. We must focus on three things at once: energy efficiency, faster growth in renewable energy, and shifting from oil to natural gas. This is in fact the approach that the IEA is recommending.

And how is Quebec doing in this respect?

Quebec is making progress, but not quickly enough.

Quebeckers are the world’s second-largest per capita consumers of electricity, behind Iceland. We use nearly 50% more than other Canadians. So we have a long way to go in terms of energy efficiency.

On the other hand, we’re doing very well when it comes to renewable energy. Hydroelectricity by itself accounts for about 40% of our energy consumption.

Nonetheless, Quebec is being very slow at replacing oil with natural gas. Close to 40% of our energy comes from oil. Natural gas, at 12.55%, lags far behind. Moreover, Quebeckers are the country’s main users of heating oil – the most highly polluting energy source. Our share of Canadian consumption of heating oil is 35%, as compared with 12% for Ontario.

What’s the most important thing we should be doing?

In Quebec, 75% of petroleum products are used for heavy transportation, either by rail, water or road. According to the IEA, one-third of the increase in greenhouse gas emissions is linked to trucking. So the priority is to switch from gasoline to natural gas there.

This shift is entirely possible, in that proven technology is available for trucks to use liquefied or compressed natural gas. In fact trucks can go from 600 to 1,000 km between filling stations.

Natural gas distribution systems are developing rapidly in Europe and the United States. There are lots of sources of supply in North America, and prices are much lower than for gasoline or diesel. Many large US companies, including Walmart, UPS and FedEx, have converted their fleets to natural gas.

Are there similar initiatives in Quebec?

The Société des traversiers du Québec has acquired three ferries running on liquefied natural gas. Groupe Robert has decided to include 180 LNG-powered trucks in its fleet. And CN has also invested in a demonstration project for locomotives using natural gas. Gaz Métro is a partner in all these projects.

We are also working on rolling out service points on the busiest trucking routes. Our network now extends from Quebec City to Metro Toronto, along highways 20 and 401.

EBI, a private group, also operates two public compressed natural gas refuelling stations in Berthierville and Montréal-Est. The fuel is derived from biomethane produced from waste. EBI also plans to extend its network in the near future.

And what about electric cars?

On the other hand, speeding up the switch from gasoline to natural gas for trucks would make it much more feasible to reach our CO2 emission reduction targets, since converting a single truck to natural gas is equivalent to nine electric cars. In fact, using natural gas or biomethane for municipal fleets or messenger services could also have a major environmental impact.

Where are we with the development of renewable energy, aside from hydroelectricity?

We’re making strides in wind power. For instance, Gaz Métro, working with Boralex, has just brought one of Canada’s largest wind farms on line, with 272 megawatts of installed power. It’s located on private land at the Seigneurie de Beaupré, near Saint-Ferréol-les-Neiges.

The next major move in Quebec will be to convert methane from waste into natural gas. There are many possible sites. This would allow us to get about 5% of our supply from this source in the long term.

You collaborated on creating the Chair in Energy Sector Management at HEC Montréal, in December 2013, and Gaz Métro is one of the Chair’s financial partners. Why this commitment?

I believe there is an urgent need for energy literacy in Quebec. It is imperative that we talk about the roles of different energy sources and the way they complement each other. If we don’t understand energy issues, we can’t make the right economic and environmental choices.

We currently all too often think just of electricity when looking at these issues. That’s understandable, given the historic role of hydroelectricity in our collective imagination. But it’s not enough. There are a lot of contradictions in the debate around energy. We want to benefit from free trade, while at the same time we talk about energy autonomy. We want infrastructure, but we don’t want it anywhere near our cities. Yet for energy sources in general, the closer they are to customers, the more efficient they are. We tend to underestimate the economic and ecological potential of natural gas. I’m convinced that Quebec’s energy future lies in exploiting the complementarity of hydroelectricity and natural gas.

News > 2014 > Energy: We have to change, and complementary sources are key