National Bank today announced a $10 million donation to Campus Montréal for the creation of the National Bank Entrepreneurship Centre (tentative name), an institute dedicated to entrepreneurship, business relaunch and family-owned businesses. A Canadian first, the Centre will provide HEC Montréal, Polytechnique Montréal and Université de Montréal students as well as the public access to entrepreneurial-related resources and initiatives.

“This is the largest single gift ever made in the Bank’s history,” National Bank President and CEO Louis Vachon stated. “It is a logical extension to our dedication to youth, education and entrepreneurship.”

Speaking at the event, Ms. Desmarais, who is also Chairperson of the Board of Directors of HEC Montréal, remarked: “As co-chair of this major campaign, I am extremely grateful to the National Bank for its landmark commitment. This partnership will encourage the creation and continuity of Quebec-based businesses.”

The heads of the three universities also praised the bank’s support. For Guy Breton, rector of Université de Montréal, this pledge exceeds the traditional university–corporate relations model. “By promoting entrepreneurship, we will help develop tomorrow’s business leaders,” he maintains. Our university is Quebec’s most active research institutions and a good number of discoveries coming out of our laboratories can be turned into new businesses,” he maintains.

Christophe Guy, Chief Executive Officer of Polytechnique Montréal, believes that engineering is the crux of innovation and of any project likely to support the growth of new businesses and stimulate SMEs who want to go further; it’s a field that has a significant impact on society. “We have students who see potential in their ideas and discoveries and want to create new businesses in budding, often unknown, sectors. The new Centre will give them leverage they need to pursue their visions and, in turn, they will help Quebec make even greater strides.”

The director of HEC Montréal, Michel Patry, said he is honoured his institution will be entrusted with managing the Centre. “I wish to express my most sincere appreciation to Mr. Vachon and the members of the Bank’s board of directors for placing their confidence in the entire HEC Montréal team.” Taking into account the resources HEC Montréal already allots to entrepreneurship, business relaunch and family-owned business issues, Mr. Patry noted that National Bank’s donation is “the catalyst that will help multiply the companies’ results.”

The National Bank Entrepreneurship Centre has a core mission based on four distinct pillars:

When they decided to join forces to mastermind a major fundraising campaign, heads of HEC Montréal, Polytechnique Montréal and Université de Montréal agreed to adopt a shared identity. Campus Montréal represents the alliance between the three institutions that form a dynamic, modern university complex. This shared brand is used on all communications made throughout the fundraising campaign.

With $178 billion in assets as at October 31, 2012, National Bank, together with its subsidiaries, forms one of Canada’s leading integrated financial groups, and was named among the five strongest banks in the world by Bloomberg Markets. The Bank has close to 20,000 employees and is widely recognized as a top employer. Its securities are listed on the Toronto Stock Exchange (TSX: NA). Follow the Bank’s activities via social media and learn more about its extensive community involvement at clearfacts.ca and commitment.nationalbank.ca. 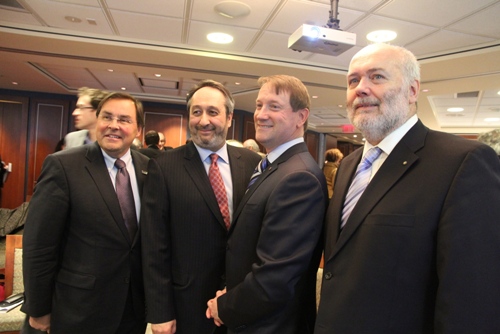