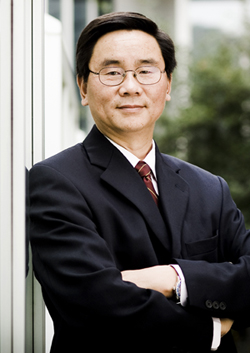 At the annual alumni reunion yesterday, Jianwei Zhang (MBA and PhD), President of Bombardier China, was named a Distinguished Alumnus, an honour granted jointly by the School and the HEC Montréal alumni network (Réseau des diplômés). This distinction comes as recognition of the exceptional professional career of an alumnus known in particular for his far-reaching knowledge of the North American and Chinese cultures and for his uncommon ability to bridge the two cultures and to attain very ambitious objectives.

During the tribute, three people very familiar with his professional life spoke fondly of their friendship and respect for him: John Paul Macdonald, Senior Vice-President, Human Resources and Public Affairs, Bombardier, and his former professors Louise Séguin Dulude (Economics) and Taïeb Hafsi (Management). Mr. Zhang still maintains close contacts with them both.

Mr. Zhang was born in China in 1957 and came to Montreal in the late 1980s. He applied himself to improving his French, while studying for his MBA. He was a brilliant student, and began working on his PhD even before completing his MBA. Fascinated by strategic alliances and relations between his country of birth and North America, he combined these interests in an impressive thesis on the decision-making process in strategic alliances, and strategic alliances between Chinese and North American businesses  (Études sur le processus de prise de décision au sein de l’alliance stratégique. Le cas des alliances stratégiques entre entreprises chinoises et nord-américaines).

He joined Quebec giant Bombardier in 1995, and quickly rose through the ranks. By 1998 he was Vice-President, Bombardier Transportation, for China. When Bombardier China was created and opened its offices in Beijing in 1999, he returned to his native land. In 2005, he became the Chief Country Representative for Bombardier in China, responsible for managing not only the multinational’s rail transportation operations in China, but also those related to aerospace. He was officially appointed President of Bombardier China in early 2010.

To encourage the company’s growth in the Middle Kingdom, the HEC Montréal graduate draws on his vast experience in the transportation industry, his wide-ranging knowledge of China, his years of management experience with a large multinational, his excellent credibility in his native land and his exceptional relations with Chinese authorities.

Despite his demanding responsibilities and heavy workload, Mr. Zhang remains deeply attached to his alma mater. He has frequently gone out of his way to most generously host groups of HEC Montréal students and professors, particularly as part of the Campus Abroad course in China.