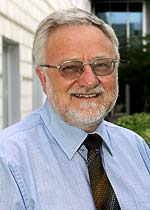 Professor Georges Dionne has been awarded the 2011 Innis-Gérin Medal from the Royal Society of Canada (RSC). The medal honours an individual whose work constitutes a distinguished and sustained contribution to the literature of the social sciences including human geography and social psychology. The distinction comes as clear recognition of this researcher’s remarkable accomplishments, and an invitation to promote leadership in the development of knowledge in Canada. Professor Dionne will be one of the figures officially honoured at the RSC induction and awards ceremony on November 26, in Ottawa.

Georges Dionne is an internationally renowned researcher in economics as applied to insurance, finance, health care, transportation and the environment. He has also contributed to applied econometrics. His key achievement is a series of statistical tests to isolate problems with information asymmetry. His work was among the first to show that asymmetrical information could lead to real economic costs.

At HEC Montréal, Professor Dionne holds the Canada Research Chair in Risk Management and teaches Finance. He is also the Editor-in-Chief of the US Journal of Risk and Insurance, a first for a non-American citizen, and President-elect of the Canadian Economics Association.

Professor Dionne has made an exceptional contribution in terms of both the number and quality of publications, as shown by the number of citations and downloads of his works: over 3,000 citations, according to Google Scholar, and nearly 20,000 downloads on the US Social Science Research Network site.

His publications include the classic Handbook of Insurance, which has become an international reference work and has now been translated into Chinese. This impressive textbook, published by Kluwer Academic Publishers, brings together articles by 35 researchers of international stature. Professor Dionne has won three awards for this volume alone, including the 2002 Kulp-Wright award from the American Risk and Insurance Association (ARIA), rewarding the author of the best book of the year in 2000. The ARIA selection committee hailed the originality of the book, which it described as “an outstanding contribution to the literature of risk and insurance.”

Georges Dionne was inducted as a Fellow of the Royal Society of Canada in 2000.

The RSC established a medal in 1966 to honour economic historian Harold A. Innis (1894-1952) and sociologist Léon Gérin (1863-1951), who were the Presidents of the Society from 1946-1947 and 1933-1934 respectively. The bronze medal is offered every two years if there is a suitable candidate. Professor Gilbert Laporte, holder of the Canada Research Chair in Distribution Management, received this medal in 2007, as did Esdras Minville (HEC Montréal Director from 1938 to 1962) in 1968.