Le contenu
News > 2011 > Meeting of the International Advisory Board

Meeting of the International Advisory Board

HEC Montréal brought key business figures and executives from around the world together in Montréal on November 20 and 21 during a meeting of its International Advisory Board (IAB) members. In a public roundtable that attracted more than 300 participants from the university and business communities, corporate leaders came to share their views and to exchange with the public on the theme of “Emerging economies and traditional multinationals.”

In closing comments, Louis Chenevert, Chairman & Chief Executive Officer of United Technologies Corp. (NYSE: UTX), and chairman of the IAB, urged students to heed the needs of today’s global economy in planning their future careers. “As we have seen in the last few years, some of the biggest areas of economic growth have been outside North America, in countries like China, India and Brazil. This trend will continue – and most likely accelerate – in the decade ahead,” Chenevert said. “As a result, those who are able to bridge cultural gaps and connect people across geographies will continue to be in great demand.”

The IAB, founded in 1993, is tasked with supporting the school’s strategic thinking and approach to its worldwide positioning and profile and to support the school’s international activities. 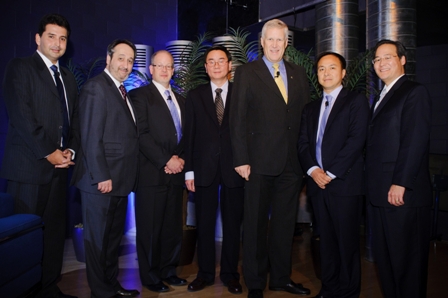 News > 2011 > Meeting of the International Advisory Board