Training contracts signed in the energy and banking sectors

Summer 2010 was a great season for the School, as new training contracts were signed with five Chinese energy companies and two in the banking industry. HEC Montréal Director Michel Patry took advantage of his trip to China to attend the convocation ceremonies for the 4th cohort of the Specialized Graduate Diploma in Management of the Energy Sector, offered at the Sichuan Electric Power Corporation, to ink these five highly significant contracts for the School.

The School’s long experience in China since 1983 has made it an experienced and respected partner when it comes to training in the energy industry. “The members of the Canadian embassy and Quebec representatives in Beijing very often cite HEC Montréal as a model Canadian university that has successfully applied its expertise in China,” says Michel Patry. “Our ongoing presence there lets us clearly understand the training needs of the companies we deal with, and to offer training tailored to their needs.” 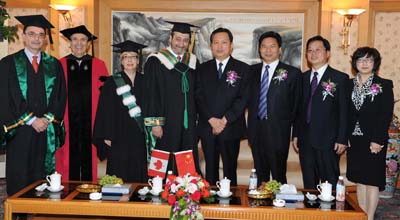 The customized training offered for Chinese organizations takes the form of seminars lasting several days at a time. The Energy Management Development Program (EMDP) given at the Jilin Electric Power Corporation, in Changchun, and the North China Grid Company, in Beijing, comprises ten seminars spread out over one year. Some fifty employees from each of the two firms will be attending these seminars in China and Montréal.

The Sichuan Electric Power Corporation, for its part, renewed the training agreement for its two-year Specialized Graduate Diploma in Management of the Energy Sector program. This year the program will be welcoming its fifth cohort, of 35 students. The Corporation also signed an agreement for the two-year EMDP program, to be held in Chengdu and Montréal starting in 2011.

The fifth agreement is with the China Guodian Corporation, which has sent 26 employees to the School for new training on “the basics of an MBA.”

“These agreements fit in perfectly with our policies on international training for executives and managers,” explains Department Director Hassan Taghvaï. He noted that the School also signed a major agreement in 2008 with the Tsinghua School of Economics and Management, in Beijing, concerning undergraduate and postgraduate student exchanges. The School’s institutional support for Chinese universities was put into practice this summer with a seminar by International Business Professor Ari Van Assche, given to PhD students and professors at Jilin University Business School. 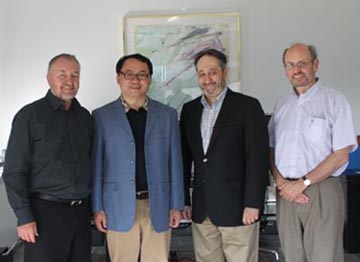 Two other training agreements with Chinese firms, this time in the banking industry, were signed in Montreal on July 10. After two years of negotiations, the School concluded the agreements when Mr. Du Benwei, Vice-President of the Association of Chinese Banking Institutions and President of the Liaoning Banking Association, was in Quebec City for the 2010 Congress of the International Confederation of Popular Banks.

Some thirty managers from Chinese banks will be taking part in a three-week study tour of major Canadian cities in 2011. Seminars, industrial tours and lectures are planned. About thirty directors of Chinese rural savings and credit co-operatives will take the same trip later in the year.