Training future leaders with help from the business community

Last night HEC Montréal and Les Affaires presented the 57th edition of the Commerce Gala, honouring nine business figures recognized for their daring and leadership. The event, once again held in the Windsor Station concourse, was aimed at raising funds to introduce advanced technology in management education. Some of the funds raised will also go to set up the Centre for Learning and Teaching Innovation at HEC Montréal.

HEC Montréal Director Michel Patry announced to the some 400 business figures attending the benefit event that $150,000 had been raised this year thanks to the generous support of the business community. “We are committed to making HEC Montréal one of the top management schools in the country and the world. To accomplish this goal we want to give all our students an innovative and unparalleled learning experience. That means developing new learning models, but also using avant-garde technologies.”

This year, the five student associations at HEC Montréal — BBA, Master’s and PhD, certificates, specialized graduate diploma and MBA — were asked to help out by identifying the nine movers and shakers in the business world who inspire them and serve as positive role models for today’s students.

Last year, HEC Montréal decided to use the funds raised by the Commerce Gala to give scholarships to beginning entrepreneurs who had dropped out of school but were now looking to go back as a way of enhancing their businesses. The first two scholarships went to Anne Laetitia and Sanaa Boussedra, who began their certificate programs in September. The two will also benefit from a five-year mentorship program in conjunction with their awards.

HEC Montréal also wishes to acknowledge the media coverage of the Gala, in the form of $494,000 in sponsored advertising. Transcontinental, with the Les Affaires newspaper, Astral Media Affichage, Neo-Traffic, Zoom Media, La Presse and lg2 all contributed to the success of the event and helped the School reach its objectives. 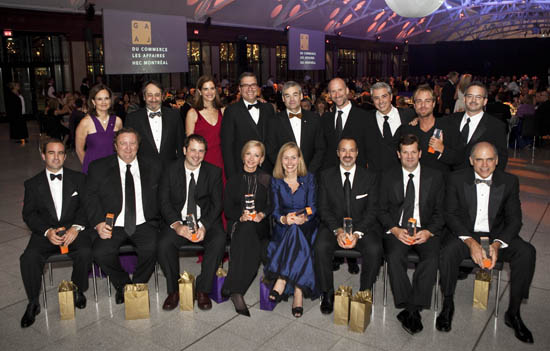