Claude Laurin Made a CMA Fellow

Claude Laurin, a Full Professor with the Department of Accounting Studies and Director of the MSc in Management program, was honoured at the annual CMA graduation ceremony of the Ordre des comptables en management accrédités (CMA). The event, attended by over 1,000 people, was held on April 17 at the Palais des congrès de Montréal. Professor Laurin was admitted as a CMA Fellow (FCMA). 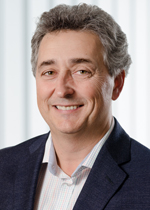 Membership as a CMA Fellow is a great national distinction, recognizing the exceptional qualities and achievements of CMAs who have distinguished themselves in their fields and serve as role models. There are only 575 members across Canada, 95 of them in Quebec.

Claude Laurin is a very active member of the profession. A certified management accountant since 1990, on the national scene he chaired the Entrance Examination French Review Committee, the Entrance Examination Committee and the Board of Examiners, as well as sitting on the National Certification Board, each time for two-year terms. In Quebec, he chaired the jury for the Compétition Inter-Action Management twice, and the training and accreditation committee (1999-2002), and was a member of the Bureau of the Order (1999-2002) and of the Training Committee (2000-2004).

Professor Laurin specializes in performance measurement, corporate governance and public sector management, all fields in which he has published many scientific papers.

His book La comptabilité de management – Prise de décision et contrôle, co-authored with colleagues Hugues Boisvert and Alexander Mersereau, won the award from the Ministère de l'Éducation du Québec in 2005, in the undergraduate textbooks category. The 5th edition of the book will be coming out next year.

Professor Laurin joined HEC Montréal in 1999, and has been a Full Professor since 2003. Before heading the MSc program, he directed the Department of Accounting Studies. He earned his PhD in Business Administration from the University of British Columbia.