Cédric Okou, in the PhD in Administration (Finance) program since fall 2007, has received the Jean Turmel Excellence Fellowship for doctoral students. The Institut de finance mathématique de Montréal (IFM2) presents this award to a student chosen from among the doctoral fellows in its regular program.

The Jean Turmel Excellence Fellowship is granted to students based on their remarkable academic achievements, the quality of their publications and an interview at which the candidate presents the first draft of his or her dissertation and answers questions from the members of the selection committee.

Cédric’s dissertation, directed by Éric Jacquier, Associate Professor with the Department of Finance, re-examined methods of risk assessment and management in a context of uncertainty concerning volumes of electricity. Since then, he has been concentrating on compromises between risk and long-term return, and their role in the strategic allocation of portfolio assets. 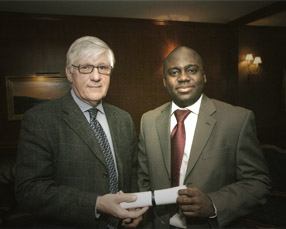 Jean Turmel presenting the parchment of the fellowship bearing his name
to the recipient, at a ceremony held at the Club Saint-Denis.