Cancelled flight, volcanic ash, extreme fatigue – everything seemed to be conspiring against the School’s sailors

You could hear the emotion and excitement in Jean-Matthieu Grappe’s voice as he explained that the HEC Montréal crew came in second in the international ranking and ninth overall in the Edhec Boat Cup. The competition, from April 17 to 24, in Brest, France, attracted some 3,000 French and international students and 170 boats, taking part in different regatta events in the port of Brest.

The eight young sailors who made up the School’s crew – Jérémie Bonnemort, Martin Canton Lauga, Bertrand Delmer, Jean-Matthieu Grappe, Alexis Le Chevallier, Benjamin Lesage, Maëla McCormick and Nicolas Roger – spent an entire year preparing for this race, and almost saw their dreams go up in smoke when the eruption of Eyjafjjöll, the Icelandic volcano, halted flights over European airspace on the very day they were to leave Montreal.

When they finally arrived in Brest, at the very last minute, the School’s crew had a lightning-fast meeting with skipper Ronan Johanno, who was waiting for them there. No time to train or even learn the ropes on the “Grand Surprise” type boat. Needless to say, they had quite a challenge ahead of them if they were to compete with the top sailors from 141 other participating universities from some twenty countries.

“The race was not only an opportunity to join in one of the biggest student sporting events in Europe, but also to forge some very strong bonds with other international crews, from UCLA, HEC Lausanne, Cambridge, Warwick and other universities, and meet potential employers,” explains Jean-Matthieu, Captain of the HEC Montréal crew and President of the Challenges Européens association, who worked so hard to make this dream a reality.

The regattas in the Roadstead of Brest are highly technical, and gave the School’s crew a chance to show what they could do, and sometimes even to pull far ahead of the competition. “After an unforgettable week of sailing and competing against some very prestigious universities, we were proud to have exceeded our objective and returned to Montreal with ninth place overall and second place in the international rankings,” he concluded. 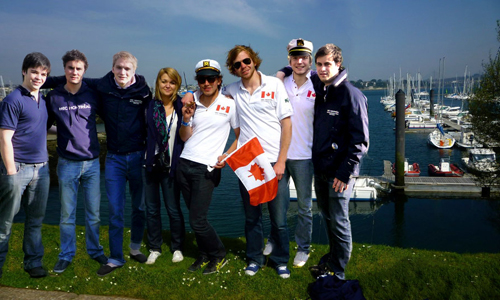