Yannis Mallat, Professor for a Day

Innovate or disappear: That was how Yannis Mallat (MBA 1999) expressed the choice facing video game creators. As part of the Professor for a Day program, the President and CEO of the Montréal and Toronto Ubisoft studios came to talk with one of Laurent Lapierre’s classes on April 6. (Professor Lapierre in fact once taught Mr. Mallat.) He talked with the MBA students about the creative demands constantly facing his company, at a time when the risks inherent in its activities and its industry are growing. 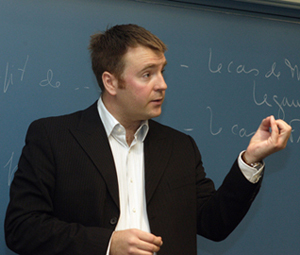 Developing a video game is undoubtedly a risky business. The young executive reminded students of a brutal statistic: Of the thousands of games released every year, only about twenty titles will actually be profitable. When you think that a project can take up to four years to develop and cost close to $100 million, and remember that a game often has a only a few months to prove itself, it’s clear that the industry is not for the faint hearted.

The stakes are even higher in the current economy. In 2009 and 2010, for one of the rare times in its young history, the industry saw game and console sales decline sharply. Gamers who once purchased ten or more titles a year now buy only three. For Yannis Mallat, the objective is clear: a title must rank in the top three worldwide, nothing less.

Innovation as a system

The ability to remain at the head of the pack depends on innovation – in terms of products, of course, but also processes, strategy and management itself.

At Ubisoft, innovation is an essential part of the production process. The publisher of Assassin’s Creed and Splinter Cell has included a step in the process where a breakthrough – either technological, artistic or conceptual – must be shown. This innovative advance must be obvious in the game experience and spark the player’s imagination so as to earn the brand a unique position on its market. No new brand is created if it does not include some kind of marked innovation.

The importance of a skilled workforce

Innovation and creativity mean talent, of course. And although the pool of skilled workers has grown since Ubisoft first arrived in Montréal (Mr. Mallat praised the very active role of the Quebec government in this respect), training has not managed to keep pace with the demand for workers. Montréal has seven large studios, all competing fiercely to recruit and retain the most talented employees.

Ubisoft also innovates when it comes to attracting and retaining employees. The average age of its workforce is currently 29. Mr. Mallat says he considers that about right and doesn’t want it to rise much more. The company makes extensive use of social media, professional development, a culture of transparency, sharing and collaboration, a focus on the individual in its human resources management, a daycare centre and doctor on the premises – just some of the examples of the means Ubisoft uses to keep its employees happy.

Another original initiative for the company, which used to manage only on a project basis, has been to create “trade communities” and “trade director” positions. This means that an employee’s professional development can be tracked by experts from his or her own field.

These innovations call for major investment, at a time when employees are facing an expanding job market. But it is a necessary risk, one that Mallat says is “part of the Ubisoft DNA.” Managers must meet customers’ and employees’ expectations, and that calls for innovation. The President and CEO sees the current situation as a good opportunity to confirm the company’s commitment to innovation and creativity.

Since the company was founded by the Guillemot brothers, in Brittany, 25 years ago, it has grown to become the world’s third-largest game publisher. It is a pretty safe bet that creativity will remain a watchword at Ubisoft.