Robert Dutton, Professor for a Day 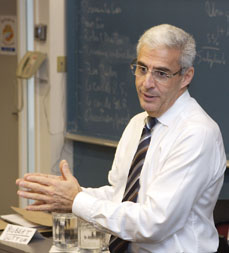 Some forty MBA students in the Leadership course taught by Laurent Lapierre attended the presentation by RONA President and CEO Robert Dutton on March 9, as part of the HEC Montréal Professor for a Day program. Mr. Dutton made a clear statement of his priorities from the outset with his theme of people come first.

Mr. Dutton, an HEC Montréal graduate who started with RONA right out of school in 1977, was promoted to Executive Vice-President and Chief Operating Officer in 1990, then President and CEO in 1992. He considers that one doesn’t manage a company, but people. The manager’s role is to mobilize the talent required to accomplish the company’s mission.

While talent is usually understood to mean exceptional skills, Mr. Dutton spoke more about the “ordinary” talent that can be found at all levels of the organization. It is a fundamental strategic asset that makes it possible to draw fully on all of the firm’s other assets, from its factories to its patents, reputation and more.

This is no utopian vision. Under Mr. Dutton’s leadership, over the past 20 years, RONA has increased its net sales tenfold, from $464 million to $4.7 billion, and tripled the number of employees in its network, from 10,000 to 30,000. RONA has gone from being a leader in the distribution sector in Quebec to seizing the top retail spot in Canada, despite the arrival of such major US chains as Home Depot and Lowe’s.

The hardware firm, whose shares first traded in 2002, achieved this remarkable growth by remaining faithful to a distinctive culture based on five strong values: service, solidarity, respect for human dignity, a focus on the common good, and a sense of responsibility. The President and CEO also cited “the courage to do things differently, to get off the beaten path” as a factor in RONA’s success.

Listening to employees and winning their loyalty

Mr. Dutton has committed himself wholeheartedly to managing employee talent. He feels that his role is to maintain what he calls employee “passion,” something that the company’s competitors cannot imitate – unlike its concepts or products. To achieve this it is important for RONA to win employees’ hearts and their loyalty, just as it does with consumers.  The company does everything possible to create opportunities for employee development. For example, when times are tough RONA ramps up its training efforts, since the company assumes that enthusiastic and better-trained employees are more likely to make sales. RONA also gives preference to young, and young retired, employees, who appreciate its flexible work schedule policy. It also has a structured succession plan so as to prepare promising employees for greater responsibility.

RONA’s rapid growth has been due mainly to acquisitions in recent years, and it strives to pass along its culture to new members of the group. For instance, it holds breakfast meetings with senior managers and “culture dinners” to discuss corporate values.

Mr. Dutton, like the members of his team, occasionally works on the front line in stores, as a way of keeping in touch with employees and the market. Year in, year out, he personally meets with 6,000 employees. He also devotes six days a year to studying and discussing the company’s future with young employees ages 20 to 35. This is an exceptional time investment for a senior executive, but one that he considers highly instructive and valuable for the company.

Continuing growth and a focus on ethics

In reply to one of the many questions asked by students after his presentation, Mr. Dutton said he is convinced that RONA can continue to grow very strongly while maintaining impeccable ethical standards. He said it was unfortunate that the recent recession has not given rise to some soul-searching in this respect, but noted that it has had an impact on buying habits. RONA, as a socially committed company with avant-garde management practices, is well placed to respond to these new consumer expectations.