The first trilingual dictation attracts students of all levels 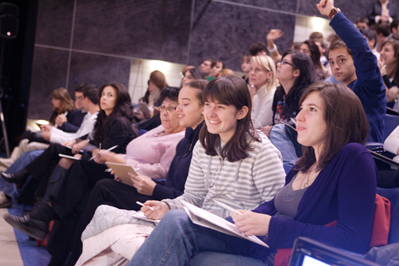 Over 250 high school, CEGEP and university students and members of the general public turned out to take part in HEC Montréal’s first trilingual dictation, organized to mark the “Journées du savoir” held at Quebec universities from November 4 to 7.

The dictation, on the theme of “I Take Care of My Planet,” was divided into three 150-word texts, each with the same degree of difficulty. The French text was read by Marie-Éva de Villers, author of the Multidictionnaire and Director of the Quality of Communication Centre at HEC Montréal, while the English was read by comedian and radio personality Christopher Hall, and the Spanish by Catalina Lopez-Correa, Vice-President, Scientific Affairs, with Génome Québec.

“The trilingual dictation was such a success that the School is thinking of making it an annual event,” said Kathleen Grant, Director of the HEC Montréal Communications and Student Recruitment Office. “Acquiring a second and third language has become essential, and is now one of students’ main concerns. The rising enrolment in the School’s trilingual BBA program confirms their interest year after year.”

A team of some sixty correctors divided into three language groups marked each copy of the dictation. The dictation was also broadcast in real time on the School’s Website, allowing students who were unable to make it to the School to listen in and test their language skills. A correction guide will be posted on the site for them next week. Note that only those dictations completed at the School by registered entrants were corrected and eligible for prizes.

The dictation was separated into two levels for each language. High school students could put down their pencils after the first paragraph, of about fifty words, while everyone else had to complete the entire dictation. The winners of the level 1 dictation are Raphaëlle Bruneau-Arbour of Villa Ste-Marcelline (gold); Nadia Saritsky-Ramirez of Collège Pierre-Laporte (silver) and Olivia Souaid of Villa Ste-Marcelline (bronze).  For the level 2 version, three students from HEC Montréal got the highest marks. They are Ève Lamargot (gold); Olivier Normandin (silver); and Rosalie Ouellet-Delorme (bronze).

The trilingual BBA
HEC Montréal is the only business school in North America to offer a trilingual Bachelor’s in Business Administration. Close to 400 students are currently enrolled in the program. The first trilingual BBA cohort graduated in spring 2008. 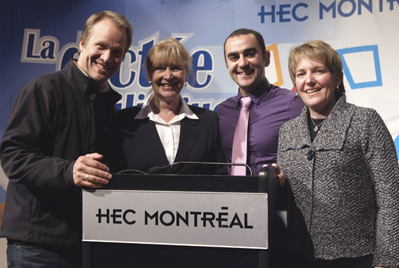