Facelift for the Decelles building

The Honourable Claude Carignan, Senator, representing the Honourable Gary Goodyear, Minister of State (Science and Technology), and the Honourable Michelle Courchesne, Quebec Minister of Education, Recreation and Sports, today announced a total of $25,426,000 in investment at HEC Montréal, under the Knowledge Infrastructure Program.

This major investment will go toward updating classrooms and student work rooms.

Plans include converting some twenty classrooms and creating student work rooms, an amphitheatre and a specialized room for preparing students for national and international business competitions – a first in Quebec.

There will also be extensive technological improvements: ACL monitors, mobile lecterns for professors, interactive blackboards and graphics tablets will all be integrated. Both faculty and students will benefit from this advanced teaching environment.

“This contribution by the two governments will allow the School not only to maintain its position as one of the world’s top business schools,” emphasized HEC Montréal Director Michel Patry, “but also to ensure its leadership in the use of information and communications technology to support teaching. When the Decelles building went up in 1970, it made extensive use of the audiovisual tools available at the time. Starting in the 1990s, HEC Montréal began using laptops in its classrooms and created the first trading room at a Quebec university. Now, by 2009, it had become imperative that we upgrade the classrooms and optimize the use of new technology in the Decelles building, which is also heavily used by our students.”

About the Knowledge Infrastructure Program

The Knowledge Infrastructure Program is a two-year, $2-billion economic stimulus measure to support infrastructure enhancement at Canadian post-secondary institutions. The agreement signed by the Government of Canada and the Government of Quebec under this program will go toward various projects at Quebec post-secondary institutions, consisting of new construction and maintenance work, renovations, repairs and upkeep.

For more information on the Knowledge Infrastructure Program, see www.ic.gc.ca/knowledge-infrastructure. 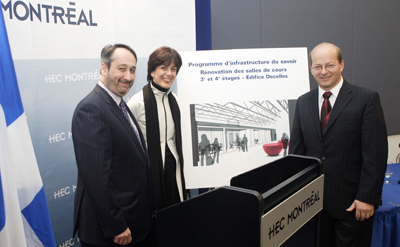 News > 2009 > Facelift for the Decelles building