The HEC Montréal team of BBA students Virginie Hamel, Lily Serreau and Sylviane Glaude took first place in the 23rd Excalibur tournament, the Canadian University Tournament in Human Resources. The winners shared a $3,000 prize. The tournament was held in Montreal on March 20 and 21, drawing nearly 70 students from 22 universities. This year’s competition was organized by the Ordre des conseillers en ressources humaines agréés (CRHA) and sponsored by the Canadian Council of Human Resources Associations (CCARH).

In preparing for the tournament, the students were coached by Gaetane C. Hains, Full-time Lecturer with the Department of Human Resources Management.

“I chose three winners,” grinned a proud Ms. Hains. “These students have not only excellent academic records, but also the skills needed for a successful career in human resources. They showed terrific judgment and refreshing creativity.”

“Our real asset was the way we respected each other’s opinions throughout the competition. We sometimes had very different ideas, but we each had a chance to defend our positions. This sort of brainstorming let us see the problem from various angles and strengthened our arguments,” explained Virginie Hamel.

This Canada-wide competition is an excellent opportunity for participants to show off their know-how to businesspeople and HR professionals. Note that this was the second triumph for HEC Montréal – the School’s team also won this tournament in 2007. 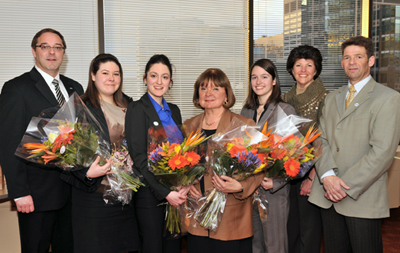