At the 55th edition of the Gala du Commerce Thursday night, HEC Montréal, Réseau HEC Montréal and Commerce magazine honoured the achievements of 12daring personalities who made their mark in Quebec’s business community in the past year. The event, which was held in the concourse of Windsor Station, was aimed at raising funds to support the training of a new generation of world-class business graduates.

Speaking to 650 representatives of the Quebec business community, Michel Patry, HEC Montréal’s director, announced that a record amount of $385,000 was raised, thanks to the event.

“We’re very grateful to our co-presidents, who have pulled off the feat of rallying numerous business leaders in support of HEC Montréal,” said Mr. Patry. “The money raised will be redistributed in the form of scholarships to students enrolled in “Passport to the World,” our international exchange program and to those participating in our Campus Abroad option and interuniversity case competitions. HEC Montréal wants to give its students the opportunity to include international experiences that are highly sought after by employers. The funds we have raised give us the room to manoeuvre we need to run these programs and activities.“

HEC Montréal has established an enviable position among large business schools on the international scene. It owes its success to the high calibre of its faculty, its talented students and its dedicated staff, as well as to the generous support it receives from business people, who contribute to developing the institution. 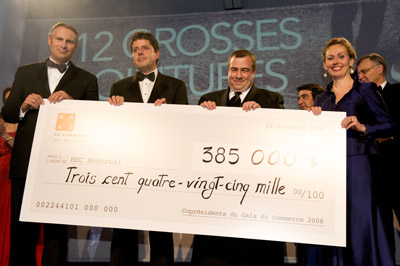