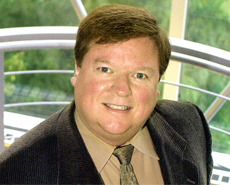 Information Technologies professor Paul Mireault has won the 2008 award from RISQ, Quebec’s Scientific Information Network. The award was presented at the 19th annual RISQ Conference, held in Montreal on November 13 and 14.

The RISQ awards were introduced in 2003 as a way of recognizing the exceptional contribution of an organization, individual or group in Quebec or elsewhere in Canada to the advancement, deployment and promotion of network technologies.

From 1999 to 2007, Mr. Mireault was a committed member of the RISQ Board of Directors. During that period he served as Secretary Treasurer for four years and chaired the Pricing Committee from 2004 to 2007.

He holds a PhD in Management Science from the Massachusetts Institute of Technology (MIT) and an MSc in computer science from the Université de Montréal.

RISQ refers to both the physical network among research and higher education institutions in Quebec and to the Montreal-based non-profit corporation that manages the network. It provides research and educational institutions with technologically advanced telecommunications services and infrastructure, the broadest possible access to the information sources required for research and instruction, as well as support for innovation and for the implementation of networked applications.