Surpassing our annual campaign goals seems to have become a tradition – to the great pleasure of the donors and HEC Montréal officials who gathered for the campaign closing ceremonies at National Bank headquarters on June 18. Thanks to our generous donors, we exceeded our target of $3.75 million and raised $3.9 million, the best annual result to date.

The 2007-2008 campaign was co-chaired by Richard Lupien, Vice-Chair of the Board, National Bank Financial Group, and Guy Archambault, Honorary HEC Montréal Professor. This was Mr. Lupien’s second straight year as Co-Chair. He thanked all the donors, volunteers and telemarketing agents for helping to make this such a successful campaign and, above all, for their contribution to training the next generation and their commitment to HEC Montréal.

Director Michel Patry took the opportunity to offer his warmest thanks to alumni and partners for their support in our educational mission and in helping us to stand out as one of the world’s leading business schools. Mr. Patry also noted that HEC Montréal has had an excellent year in terms not only of its overall accomplishments, but also of its students’ success at international competitions.

Louis Larivière, Director of the Development Office, said that he was delighted at the 5.5% increase in the number of donors, which has now reached nearly 6,500. He mentioned a few of this year’s highlights. 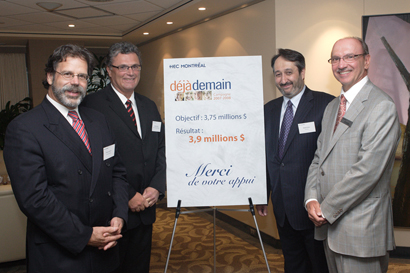