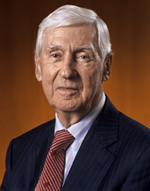 At its annual convocation ceremony on June 1 at Salle Wilfrid-Pelletier, Place des Arts, HEC Montréal will honour André Chagnon, chairman and CEO of the Fondation Lucie et André Chagnon and former head of Vidéotron Group. Mr. Chagnon will be granted an honorary doctorate by the Université de Montréal at the recommendation of the HEC Montréal.

Mr. Chagnon will be presented with his honorary doctorate before the convocation ceremony for new graduates, who will be receiving regular and trilingual bachelor’s degrees in business administration (BBA), management (B. Gest.) and science (B. Sc.), accompanied by their guests, friends and family. This year, HEC Montréal will be awarding 1,308 undergraduate degrees.

“André Chagnon is a visionary. He’s a bold and tireless entrepreneur who has left a major industrial and commercial legacy in Quebec,” says Michel Patry, HEC Montréal’s director. “He’s certainly a first-rate role model for our students, graduates and staff. His innovative esprit and profound social and philanthropic commitment make him an exceptional human being, and we are pleased to pay tribute to him today.”

Mr. Chagnon established his first electrical services company in 1957. Seven years later, he founded one of the most profitable cable companies in North America: Vidéotron. In 2000, he divested himself of Vidéotron Group and its subsidiaries and, with his wife and the support of his children, created the Fondation Lucie and André Chagnon, which today is Canada’s leading private philanthropic. The Foundation is committed to developing and improving health, preventing poverty, and supporting children and their parents to foster success at school.

“It’s a great privilege to receive this honorary doctorate from HEC Montréal,” says Mr. Chagnon. “I would like to dedicate this honour to all children, in the hope that they can have access to a high-calibre education. I dream of a healthy society where poverty no longer exists. I encourage all of these young graduates—who have received so much and will continue to receive even more—to get involved and share their knowledge with those who have not had the same chances as they had.”