The 2008 Relève d'Excellence awards organized by the Réseau HEC Montréal, always a popular event, brought together some 350 alumni and business figures this morning to salute the talents and achievements of a number of HEC Montréal alumni under age 35. The 23rd edition of this breakfast gala, with Robert Blain (BBA 1979), Senior Vice-President and CFO of Cirque du Soleil, serving as Honorary Chair, was held at the Fairmont Queen Elizabeth Hotel.

The winners in the different categories were:

There were some forty outstanding candidates this year. Two of them in particular caught the eye of the 20 members of our prestigious jury and were presented with the Jury’s Choice award. They are:

The winners in the 2008 edition of the Relève d'Excellence awards each received a one-year subscription to the Entre-vues and Rencontres avec un leader series of meetings organized by Réseau HEC Montréal, as well as a two-day trip to James Bay, courtesy of Hydro-Québec, the official presenter of the event, and a trophy created by glassblower François Perreault. 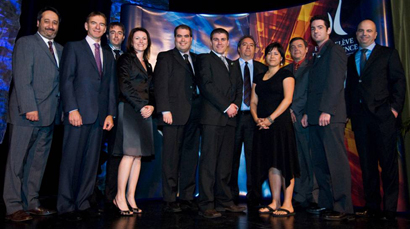