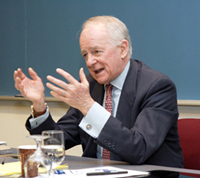 L. Yves Fortier, Chairman of the Ogilvy Renault law firm, spoke to Bachelor’s in Business Administration students on April 8, as part of the Professor for a Day program.

The man whom La Presse dubbed the “Federer of international arbitration,” in recognition of his passion for tennis and his renowned mediation skills, spoke to students about the highlights of an inspiring career. A Rhodes scholar and graduate of both the Université de Montréal and McGill University, Mr. Fortier considers himself first and foremost an attorney, and has pleaded cases in courts and the highest instances in Canada and abroad, for many years.

In 1988, he accepted the position of Canadian Ambassador to the United Nations, in New York, a post he held until 1992. “It was a fascinating time,” he recalls, “that left a mark on my life. The fall of the Berlin Wall, the transition from the Soviet Union to Russia, the beginning of the Gulf War ... those were just a few of the amazing things I witnessed close up thanks to my position at the UN.”

Those years also gave him the opportunity to hone his skills as an arbitrator and negotiator. Mr. Fortier was happy to offer the students advice, and reminded them that the most important tool in international negotiations is patience. “Above all,” he emphasized, “you have to know your own case inside out – and that of your adversary as well. You have to be able to foresee the arguments he will make, to anticipate the next move, as in chess. You can’t be too well prepared going into negotiations, be it on the international scene or elsewhere.” Mr. Fortier’s negotiating skills have contributed to many causes, for he is a member of many boards of directors and chairs several, including Alcan, which recently signed an agreement with Rio Tinto.

Over the course of his career, he has been called upon to settle a tremendous variety of commercial and political disputes, from the question of boundaries between Equatorial Guinea and Gabon to the renewal of the Canada-US Pacific Salmon Treaty.

One last piece of advice from a man considered by his peers to be one of the world’s best international arbitrators: “Always demand to negotiate with the president of the country or the company. Experience has taught me that it is much more efficient to deal with the real decision makers!” The students in the class are sure to add that tip to their negotiating toolkits.