At the invitation of Montreal Mayor Gérald Tremblay, some one hundred guests gathered yesterday at Montreal City Hall for closing ceremonies wrapping up the School’s 100th anniversary celebrations and a year of festivities full of outstanding events. The evening was a warm and enjoyable experience for all concerned, and an opportunity for the dignitaries in attendance to sign the City’s official guest book.

Mayor Tremblay spoke first, expressing his deep affection for the School and reminding the audience that he had taught at and later directed the Executive Education Centre, now known simply as Executive Education. He recalled that on the School’s 75th anniversary, Premier René Lévesque had described the role of the School as essential for Quebec. Mr. Tremblay noted that the School’s role is still every bit as important, adding that its openness to the world has always benefited Montreal and Quebec.

Hélène Desmarais, Chair of the School’s Board of Directors, said that she was delighted to see how the School had achieved its goals. Right from the outset, in planning the 100th anniversary celebrations, HEC Montréal had set out to hold events that would be both festive and educational. “The School took a number of significant initiatives and organized events that will go down in history.” As Ms. Desmarais reminded listeners, the mission could not have been accomplished without the unflagging commitment of the some 300 individuals who contributed in different ways to making the 100th anniversary a success.

HEC Montréal Director Michel Patry followed up with praise for this extensive group effort, expressing his deepest and most sincere gratitude to all the faculty members, students, staff, alumni, businesspeople and friends of the School, some one hundred of them present last night, who were the pillars of this success..

Mr. Patry also emphasized the warm and symbolic atmosphere of the recognition and closing ceremonies at City Hall. Warm, given the Mayor’s friendly relations with the School, and symbolic, given how the School’s destiny is so closely tied to the history of Montreal. Moving on to the future, the Director stated that the School’s ambition is to continue providing decisive leadership over the coming century.

Pierre Brunet, Chair of the Board of the Caisse de dépôt et placement du Québec, then took the floor and noted the parallels between the city’s history and that of HEC Montréal. In its first 100 years, the School trained 58,000 graduates, who have served as ambassadors for their School and its city around the world. Lastly, he said how much he had enjoyed and how proud he was of his role as Honorary Chair of the Committee for HEC Montréal's 100th anniversary celebrations, thanks to all those people who had worked so hard to create the event and made an important mark in the School’s history. 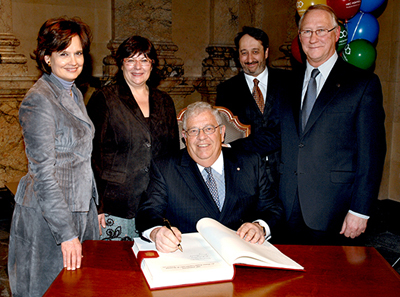 A gift from the heart

Mayor Tremblay, visibly moved, then presented a very meaningful gift to the School: a painting of Alma Lepage, the first woman to graduate from the School, in 1946. The painting was actually donated by Mr. Tremblay’s mother-in-law, Pauline Desjardins-Tailleur, a cousin and friend of Alma Lepage right up to her death, and his wife, Suzanne Tailleur. In the early 1990s, Alma Lepage made a substantial gift to the School and created a $210,000 fund that is used to grant two scholarships, one needs bursary and an award, totalling $20,000 every year. 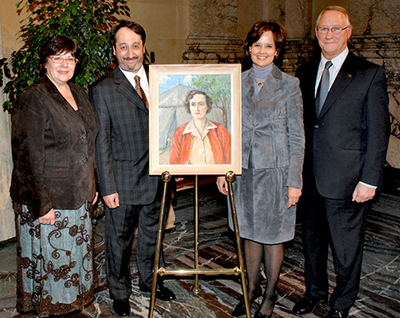 Thanks to committee members

All the speakers noted that the success of the School's year-long 100th anniversary celebrations was due to the commitment and generosity of a great many people, in particular the members of the different committees: