The HEC Montréal team has emerged triumphant from the John Molson School of Business MBA International Case Competition. The 27th edition of this prestigious event, founded in 1981, brought together over 150 students from 36 universities in 9 countries at the Hilton Bonaventure hotel in Montreal, from January 7 to 12.

The members of the HEC Montréal team, Rebecca Fruchter, Jeffrey Hall-Martin, Katalin Orosz, Ayman Tatari and Laurence Vincent, took on the best that the other participating universities could offer and clearly showed their analytical skills and their ability to solve real-life problems encountered in the business world and suggest realistic solutions. The winners will share a prize of $10,000 from Export Development Canada.

The competitors had to analyze seven cases – five in the round-robin tournament and one in each of the semi-finals and finals. For each case, they had three hours to prepare solutions and arguments, to be presented to a jury consisting of prominent members of the business community. One of these cases was a live case presentation by a major company about a real-life business challenge it is currently facing.

MBA Director Jean Talbot was delighted and above all very proud of his students’ performance, and their rigorous analysis and insight throughout the process. “The level of competition was very high,” he noted. “This was a very demanding and intense exercise for the participants, who were being evaluated by experienced executives and senior managers. This victory is also a great illustration of how well-attuned our MBA program is to realities in the business world.”

Jean Talbot also emphasized the excellent work by MBA lecturer and doctoral student Mouloud Khelif, the team’s coach, who helped the students prepare and supported them throughout the competition.

The jury consisted of over 200 business executives and leaders from Montreal, Ottawa, Toronto and the international business community. Stephen Sharp, Senior Vice-President, Wachovia Capital Finance of Canada, was the Lead Judge.

Université Laval took second place, and the John Molson School of Business came in third. Videos of the finalists’ presentations will be available shortly at www.mbacasecomp.com. 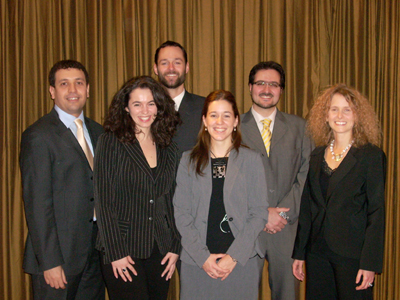