Lallemand donates $1 million to HEC Montréal for research in accounting, taxation and auditing

In memory of Roland Chagnon 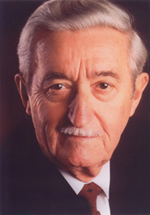 This will allow Professors Landry and Morin to devote themselves intensively to their research and teaching. Ms. Landry is particularly interested in corporate accounting and taxation and corporate reorganizations. Ms. Morin, for her part, is one of the few academics to focus on the complex subject of public sector auditing.

As HEC Montréal Director Michel Patry noted, “This generous contribution by Lallemand will allow the School to strengthen its leadership in terms of accounting research, a field in which HEC Montréal has always aspired to a major role. The two professors who will benefit from this support from Lallemand are already well known in their respective fields, so this is sure to contribute to the School’s profile in the Quebec business world and on the international scene.”

Roland Chagnon, FCA, graduated with a commerce degree, with great distinction, from HEC Montréal in 1930. He earned his CA and practised as an accountant for many years, before becoming the Treasurer and later the Executive Director of the Syndicat de Québec department store in Quebec City, and later of Dupuis Frères. He acquired Lallemand in 1952 and served as President and CEO until 1975. He remained active in the family business up to age 93, on the Board of Directors. “Social commitment was one of my father’s basic values, and he was always involved in Montreal economic and social life,” emphasized Jean F. Chagnon, President of Lallemand. “He was always concerned with creating a prosperous society. Contributing to society by supporting the training of our future business elite was one of his lifelong priorities.”

Mr. Chagnon always maintained close ties with his alma mater. While he was President of the Chambre de commerce de Montréal in 1956, it pressured the Quebec government to recognize the École des hautes études commerciales (HEC) as a university – this status was granted in 1957. He continued to support the School as a member of its Board from 1957 to 1963, and served as President of the Réseau HEC Montréal alumni association in 1961. He received the Commerce Gala award in 1990, along with a prize of $5,000, which he donated to the HEC Montréal alumni foundation. HEC Montréal conferred an honorary doctorate on Mr. Chagnon in 1991, and presented him with the Diplômé HEC émérite award in 1992.

Lallemand, Inc. is a privately held Canadian company founded at the end of the 19th century, specializing in the development, production and marketing of yeast and bacteria. With production plants on several continents and worldwide distribution capacities, Lallemand is apparently the only supplier of both yeast and bacteria on such a wide scale. The administrative offices for the parent company are in Montreal, Canada, on the historic site of the first yeast production plant.