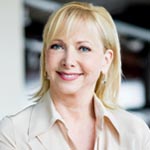 Born into a Quebec City–based entrepreneurial family, Christiane Germain learned the ins and outs of the business world early in life. This resourcefulness would prove to be instrumental when came time for the family’s restaurant-focused business to explore new horizons in 1988, with the opening of its first hotel. In the decades since, she has worked with her brother and co-president, Jean-Yves Germain, to create and grow two highly popular hotel brands, namely Le Germain and Alt.

As the co-president of Groupe Germain Hotels, she oversees operations and marketing for all of the Group’s properties. She has been honoured on multiple occasions by the Canadian business and hospitality communities for her entrepreneurial savvy, vitality, tenacity and creativity. After more than 30 years in the industry, she is happy to share her finely crafted insights with people who embrace the Group’s values.

A firm believer in investing in the country’s economic well-being, she makes a point of promoting Canadian-grown talent, notably through the Group’s local procurement policy. In addition to being at the helm of a business with the wind in its sails, she is proud to serve as the chair of the board of directors of the Musée national des beaux-arts du Québec and lend her time and expertise to several other charitable organizations. In fact, she was named by La Presse as the year’s most socially engaged executive in 2017. She is also known for her appearance on TV’s Dans l’œil du dragon.

Course given by Christiane Germain: